In the Land of the Great Spiders 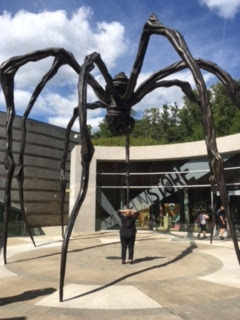 I missed yesterday's post. Mea culpa. As always, I was on the road again, this time from Kansas City, MO to Eureka Springs, AK. So while I should have been blogging, I was gawking at the art in the Crystal Springs Museum, often informally called the Walmart Museum because that's where the money comes from.

As you can see, it has one enormous Louise Bourgeois spider. I love those things. Especially since she's said that they're representations of her mother.

The museum specializes in the best American art that money can buy. (With the occasional foreign exception, such as Maman, above.) It has the original Norman Rockwell painting of Rosie the Riveter which, while you could quibble about this or that aspect, stands up well surrounded by august competition.

I could bore you forever about the artworks I particularly love. But I won't. Instead, I'll simply observe that, having started only recently, the museum's curators have made a conscious effort to include women and non-white artists in numbers more closely representing their accomplishments in the visual arts.

Strongly recommended, next time you're in this part of Arkansas.


But enough about not-me...

The good folks at Tachyon Publications have put together more excerpts from the many rave reviews of my brilliant new collection Not So Much, Said the Cat. You can read them here.

I have no idea why you'd want to, mind. But how nice for me that they exist!


Posted by Michael Swanwick at 9:04 AM

Looks like a great museum (and a great spider!). The museum didn't exist back in the days I lived nearby, though I did date a girl from Fayetteville for awhile ;-)

On my bucket-kist (odd term). As are LB's Great Spiders. I presume her Mom has passed on?

If you have further time, a visit to Eureka Springs AK is worthwhile. Better yet, the Gilcrease & Philbrook museums in Tulsa. Willard Stone! Plus, lots of cool old Art-Deco bldgs from the Oil Boom days. Plus,memories of Narrow Valley and White Cow Moon...

I think I recall Lafferty had some Indian blood. As do I (Cherokee, but from SC).

Yes. Louise herself is now very old. Her parents made a living repairing tapestries, so she associated her mother with needles.