A Hologram of A Hovercraft 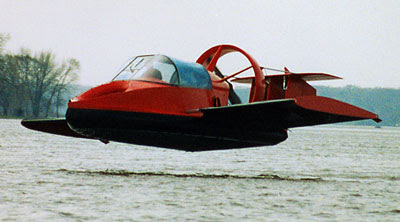 In response to my last post, Mark Pontin requested that I expand upon a comment I made on a Worldcon panel. With both respect and regret, Mark, I have to say Homey don't play that. Mostly because I'd have to research up a lot of examples and citations, which is a lot of work. And a lot of work is something I try never to do for free.

But I can offer something not far unrelated, off the top of my head: the concept of fossil science fiction.

Fossil science fiction is not my own invention. I heard of it maybe a decade ago at a Worldcon room party. A writer I know and admire (only I'm not sure which one -- the person I thought it was denies everything) told me that he'd run a story past a younger writer friend who called him on having a 3-D picture hanging on a character' s wall.

"Why is this here?" The younger writer said. "Holograms have come and gone. They're not a likely part of the future anymore. The only reason you've included it is because they were in stories written when holograms were futuristic. Now it's fossil science fiction."

"And a hologram of a hovercraft would be DOUBLY fossil!" my friend exclaimed.

Examples of fossil science fiction are legion. Perhaps you'd care to post one below? In any case, the next-to-last thing a writer should do with a story, immediately before reading it aloud, is to go through it with a sceptical eye, looking for the fossil remains of other people's ideas.


Above: It may not be the Future, but you still want one. You can find the manufacturer's page here.

I don't think I agree with the young whipper snapper. If his thinking was correct, we wouldn't have 3-D movies anymore. But they keep coming out. If someone built a better hologram, it might become the standard for portraits. Or it might become the next useless gift everyone buys for grandma.

M.S. wrote: 'a lot of work is something I try never to do for free.'

You're right to take that attitude. It's why I (respectfully) said I understood that you (or any unpaid blogger) shouldn't do assignments.

And nevertheless your explanation of 'fossil SF' perfectly explains what you meant. I thank you, sir. As they used to say, you are a gentleman, a scholar, and a judge of fine whiskey, women and everything.

I would suggest that "taking the suborbital" from anywhere to anywhere else is something that is no longer done.

Neither is living in an arcology.

Not sure if this counts - but in the excellent Islands in the Net (1989), Bruce Sterling has characters using a fax machine .....

I was listening to talk radio once, and the woman dialing in used the phrase "like something from back in the Space Age".

Though we're living in a time of orbital space stations (well - one), satellites, private rocket companies, rocket ships landing on their tail jets just like they were always supposed to and the beginnings of space tourism, I still knew just what she meant, and shed a single tear.

Ruzz - on an Australian satirical website - our equivalent to The Onion - there was recently an article about our Prime Minister giving a speech at the opening of a fax machine factory, and praising this new technology that can send a picture clear across town!

Ahem, it's a fossil future only if you don't explain it. Between people's nostalgia for their youth and mass media marketing ANYTHING could become a fad as part of the background of a story. Otherwise, why are they still making STARS WARS and STAR TREK movies? You could say that mid-20th Century folk music is hot again or Eastern European Jewish klezmer music.Or say it's the 50th anniversary of Guardians of the Galaxy movie(the first of five!) and paper or hologram posters of the characters are everywhere. However,I'm not sure you can justify talking dolphins, polywater, or memory RNA injections as such, but it might be worth a shot!

I suspect that the main problem with holograms, in their current sense, is that the quality is so poor. That's why they're not popular. Your critic erred in assuming that holograms will remain trapped in original Star Wars territory.

If, instead, you consider the current state of virtual reality, you can get a glimpse of where we're going with this technology. Fast forward a century, place the viewer technology in the picture frame, and bump up the resolution beyond the current level and it's easy to imagine a truly three-dimensional image that looks real. A few years back, I remember being wowed by some high-resolution "aquarium" screen savers that to a casual glance, looked real. Take advantage of modern higher-resolution screens and better rendering and I imagine the same software looks even better. More recently, I've seen video game demos that you have to look closely at to confirm that they're not real; even the physics model implemented by the rendering software is incredible. The technology will only get better.

That being the case, I'd say your use of a holographic picture was and remains a perfectly plausible extrapolation. As a case in point, I had lunch at my sister's place earlier today, and her husband had a wilderness scene displayed on his HD TV. Not nearly as good as looking out the window, but surprisingly close. So we're on track for achieving this, and probably sooner than the 100 years I suggested.

How about videophones? In the 1950s, when television was king, they often appeared in future-set sf stories. Now everybody carries a combination phone, computer, and tv studio in their pockets.