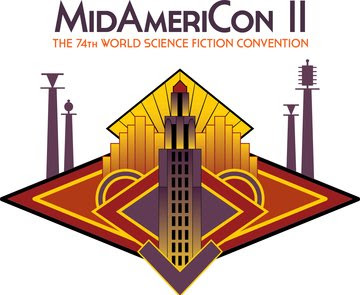 As always, I'm on the road again! And when I get back, I'll be flying off to Kansas City where I'm slated to be a guest of honor at MidAmeriCon II.

I'm not sure how much blogging I'll have the time to do, but I'll try to keep in touch. In the meantime, for those of you who are going to be in attendance, here's my preliminary schedule:

2:00 p.m.
Does "Today's" Science Fiction Still Inspire the Future? (Participant)
Heinlein, Asimov, and Bradbury inspired a generation of young minds to become today's scientists and engineers. Where have those "inspired" kids brought us today? What connections can we tie back to the works of these SF icons? Are today's SF authors still inspiring younger generations to pursue technology and science? If so, which authors are inspiring the next generation and in what ways?
2207 (Kansas City Convention Center)
with Patrick Nielsen Hayden, Cynthia Ward, Adam-Troy Castro

1:00 p.m.
What's New in the World of Dinosaurs! (Participant)
Dinosaurs are cool! New discoveries are being made every day as we unearth bones from the past. In a recent discovery, scientists believe that a pregnant T-Rex found in Montana may have fragments of DNA preserved in her medullary bone. What else is out there? What other news from the past is there to share?
2205 - A/V (Kansas City Convention Center)
with Bennett Coles, Mel. White, Frank Wu, Ms Rosemary Claire Smith

8:30 a.m.
Stroll with the Stars
The Worlds Most Famous Parking Garage: A tour of the Power and Light District.
2.15 km

3:00 p.m.
The Secret History of Science Fiction (Participant)
“The first thing I did when I became an editor was to learn all the dirt, who hated who and why,” David Hartwell said. “Because if I was going to do business in this field, I needed to know where the landmines were buried.” Then he told Michael Swanwick a scandalous story. With David’s permission, Michael began transcribing his stories of the early years of the genre. (Stories about living writers were never shared.) "The Secret History of Science Fiction,” would have been a juicy addition to our literary history. Unfortunately, David died and with him the project. There are a few entries that remain and this panel is a forum to share such stories and honor David's humor and intelligence.
2504B (Kansas City Convention Center)
with Patrick Nielsen Hayden, Gordon Van Gelder, Eileen Gunn

2:00 p.m.
MidAmeriCon I: A Conversation (Participant)
A discussion about the first MidAmeriCon from three authors who were there: Michael Swanwick who was a fan and fledgling writer; George R R Martin who was there as an author and co-founded the Hugo Losers Party, and Pat Cadigan as a committee member (and Heinlein's Guest Liaison).
Tucker Stage (Kansas City Convention Center)
with George R. R. Martin, Ms Pat Cadigan

Jeez, Michael, you will be busy ! Raise a glass to the ghosts of Hope Mirrlees & James Branch Cabell !

Have a terrific worldcon! Hope you will meet some of your Russian friends there. Wouldn't that be nice?