Of a Downpour and a Spectacled Owl 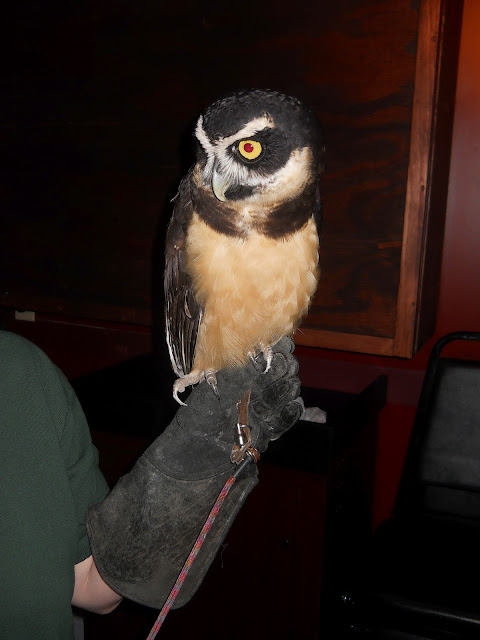 This is how pleasantly odd my life is.

Friday, Marianne and I went into Center City to hear a presentation by our friend, photographer Kyle Cassidy, and just as we stepped out of the parking garage were caught by a sudden torrential downpour.  So we ducked into the nearest doorway, which happened to be that of the Pen & Pencil Club.

Where a batch of our friends happened to be sitting around a table.

So we sat down and ordered drinks.

And it turned out that the club had been taken over for a private party honoring Stu Bykofsky, a Philadelphia Daily News columnist for 35 years and newspaperman there for I think it was five years previously but I could well be wrong. Which means that ordinarily we would have been kicked out, but since we were regulars and well-behaved, Danny the Bartender told us to stay.

Which is how we missed out on the event we'd come downtown to see.  My apologies, Kyle.

But it was extremely cool to be hobnobbing with people who had devoted their lives to reportage.  Foul-mouthed though one or two of them were.

Also, the party had an owl!  From the zoo!  That's it up above, a spectacled owl from the jungles of South America.  Beautiful bird.  It was a pleasure to make his acquaintance.


Above:  I went to Bykofsky's party and took a picture of an owl instead of him.  This says something about my priorities.

A really beautiful owl.
One night in Panama, I opened a door and found myself face-to-face with one of these. A great memory.

Possibly ironically it was a comment of yours several years ago that made me realize this was a project that i needed to finish. You shall hear talk of it some other time (and again and again and again). I'm glad you met the owl!