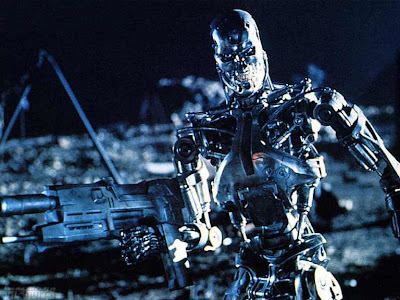 People who download books illegally hate it when I point out that they're functional Communists -- and lazy, unthinking Communists at that, because the system doesn't work if you don't have a Communist society in place.  Achieving which, history has shown, is a prolonged, messy process involving many, many corpses.  They want to bypass all that and get right to the Getting Stuff For Free part.

The self-righteousness these Commies display, however, does prove one thing:  Given the opportunity to steal with impunity, a great number of people will spontaneously generate justifications for doing so.

So I view the fact that we're getting very close to having  affordable, general-purpose humanoid robots with mixed feelings.  Because they won't just be able to wash dishes, vacuum rugs, and mow the lawn for you.  Give one of them a gun and send it out into the night and it can stick up gas stations and relieve pedestrians of their watches and wallets.

The first time this happens, it's going to be a major news event.  The next few hundred are going to be a crime wave.  By the time it's the standard strategy for every teenager who thinks that he or she deserves a bigger allowance, it's going to be business as usual.  When it's so common that the police stop responding to calls, armed robbery will be legalized.

Because money wants to be free.  It's only fair.  If this were a Libertarian (or Communist or Insert Your Favorite Ideology Here) society, I wouldn't need to do this.  So, really, you brought this on yourself.

Above:  A Terminator with a gun.  Not that it needs one.

Aha but what if all the robot did was duplicate cash rather than STEAL it Now don't get me wrong I buy a lot of digital book but no anything over $10 that's where I believe gouging starts.

Duplicating cash would cause inflation, making all money worth less and thus hurting everyone who owned money. Intentions matter less than actual results.

The argument that digital theft doesn't hurt anybody took a hard hit with me when I was offered less money for my new novel than I got for the last one, which had "earned out," as we say -- made enough money that the publisher owed me more. Pretty much every writer I know is in the same situation.

Hey! And there's a new justification. "If it weren't for digital theft, I wouldn't NEED the robot."

I do have to wonder how How I Lost It actually earns a living.

Hey pal, surf over to Mr. Swanwick's website and read his short-short 'Pirates'. It's free, which should appeal to your sense of entitlement.

Hopefully the fact that we'd be able to "kill" robots with a clean conscience (and presumably no serious legal consequences) would stave off huge waves of robot crime. Assuming bots aren't cheap, we could probably make it less than cost-effective to send them out to do dirty work.

Just out of interest: In your experience, how are the publishers dealing with the situation? A few years ago the music industry pretty much missed the boat on online piracy by doing all the wrong things. Until iTunes came along to save what was left of their business.

As somebody who owns almost all of your books I was rather surprised to see that so few of them are available in digital format. Available to purchase, that is.
And this is the point I don't quite get: the books are out there now already. What keeps the publishers from offering all of your books through existing channels like iTunes or Amazon or other online bookstores? A digital edition is not the sort of investment a new print edition is. Or are there some legal questions involved that I am not aware of?

Mostly, the publishers are panicking. The problem is that in the decade before e-books became practical, almost all the publishing houses were bought up by gigantic media conglomerates, which then imposed upon them business models that don't really work for publishing. So they were in pretty bad shape even before e-theft became a major problem.

My agent is currently working on the e-books situation. So I should have some good news on that front relatively soon.