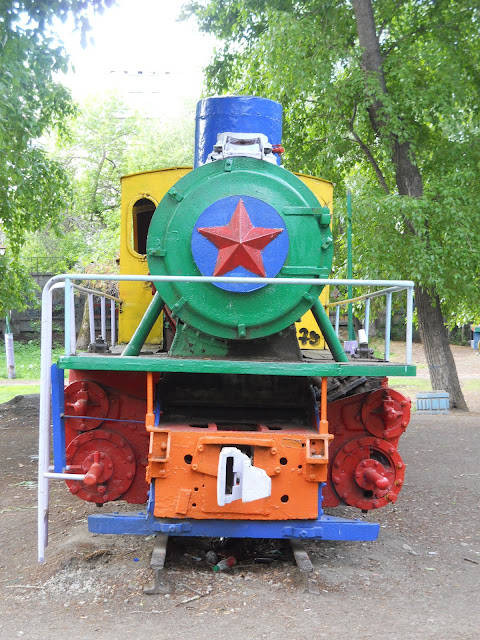 During the Cold War, here in America, everything the Soviets did was inferior and wrong.  When they managed to do something that was undeniably better than what we had -- the Moscow Metro stations, for example -- they did it for the wrong reasons.  As propaganda, usually.

I am not about to deny the horrors of the Soviet Union.  The millions of deaths from forced collectivism, government-caused famine, and the Terror were very real.  Still . . . everything?  Without exception? 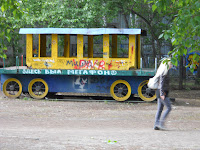 One morning in Ekaterinburg, I went for a walk and come upon Engels Park.  It was sad and wonderful, the ruins of a place that had been lovingly created to give children a playground worthy of their imaginations.

The centerpiece of this was a locomotive.  A real one, not mock, which had been made safe for children and then painted bright colors.  There was also a brick spiral with window-crenelations which could be used as a fort or a house, a ramp which I'm guessing was for winter sledding, some standard playground equipment, a railroad car separate from the locomotive, a cluster of brick castle-towers that looked like chess pieces, and much else as well. 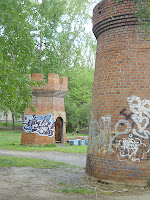 In the wake of Perestroika, everything fell apart, including Engels Park, most of which was defaced by vandalism and graffiti. During Soviet Times, everybody celebrated Lenin's birthday by "voluntarily" beautifying public spaces.  "It was exactly like a day of work," one woman old me, "only without pay."  Now that Russia is capitalist, volunteerism seems to be as much a discredited relic of the past as Communism itself.  Nobody plays Ivanhoe in the towers because they're filled with rubble and liquor bottles.  Half the playground equipment is broken.

But I believe that someday Engels Park will make a comeback.  In my own Philadelphia neighborhood, Gorgas Park was sad and rundown when I moved here, thirty-some years ago and today it's something to be proud of.  Engels Park is a small gem -- it just needs some polishing.  Which, as Ekaterinburg continues to grow more prosperous, it will eventually get.  After all, somebody is keeping that locomotive painted.

And even in Cold War times it was generally acknowledged -- grudgingly, perhaps -- that the Russians were pretty good to their children.

Above:  I could have taken a lot more pictures of broken things, but my heart wasn't in it.

Very nice post for our city.
I remember there was the whole passanger aerplane standing there for children. Don't know exactly what happened, may be it was burnt, but it was disappered thirty years ago.