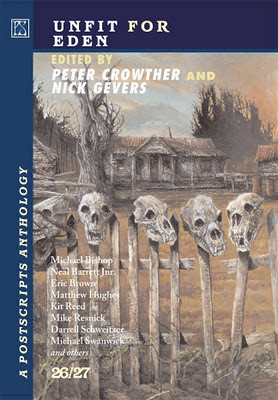 I have a story coming out soon in the latest Postscript anthology, #26/27 Unfit for Eden. It's the second of two stories that I dreamed up while I was in Yekaterinburg, Russia.  The first one was "Libertarian Russia," and every time I meet a émigré Russian who's read it, he or she inevitably takes me aside to demand I explain what I meant by it.

I'm expecting an intensified version of this reaction for the second story.  It's called "Pushkin the American."


The American, whose name has since been forgotten, came to Yekaterinburg in the Ural Mountains in the year 1817.  He was a young man and whatever disgrace had driven him so far had been left behind in his native Philadelphia.  Somehow he had found work as the secretary of an American industrialist who, along with his wife, was making a tour of Russia with a particular eye to the natural riches of the Ural Mountains.

You probably know this already, but suggesting that Pushkin was an American is like saying that Shakespeare was French or George Washington was a spy for the British, or possibly some combination of the two.  It's every bit as impossible as a libertarian Russia, while running the risk of being taken as an insult to a national hero.

But of course the story has nothing to do with Pushkin at all.  I conceived of it on my last day in Yekaterinburg.  I'd been pushing myself hard, trying to see as much as I could during my stay and suddenly, less than half a mile from a museum that held some Kandinsky paintings I very much wanted to see, discovered I could go no further.  Totally exhausted, and feeling that strange psychological pressure that comes from being immersed in a language you cannot speak, I asked myself:  What if I couldn't go home?  I'd have to get a menial job in order to support myself and I'd also have to learn Russian.  But if I was ever to become a writer again -- ever to become myself again -- I'd have to know Russian as well as a Russian does.  I tried to imagine what that would be like.

Of course, nobody would want to read a story about Swanwick the Russian.  But the idea had its talons in my imagination.  So I wrote about Pushkin the American instead.

The Russians are one of the most literary peoples on earth.  I hope they understand that this story was written with nothing but admiration for their literature and their culture.

Here's the table of contents for the anthology.  If you can't find something there to like, you're far, far pickier than I am.

Above:  There's the cover.

I look forward to reading your story, which sounds very interesting.

Congratulations on the sale, Vaughan. Postscripts is a good market.