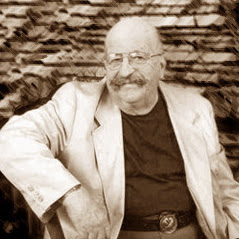 On March 17, Gene Wolfe will be honored with the first Fuller Award, acknowledging his lifetime achievement to literature, at the Sanfilippo Estate, outside of Chicago, by the Chicago Literary Hall of Fame.
Needless to say, I will be there.
Also present to honor Wolfe will be  Neil Gaiman, Peter Straub, Michael Dirda, Luis Urrea, Audrey Niffenegger, Jody Lynn Nye, Patrick O’Leary, and quite probably others.  Peter Sagal, host of NPR’s news quiz show Wait Wait … Don’t Tell Me!” will be the toastmaster and the master of ceremonies  will be Gary K. Wolfe.
Which is to say that I'll be hanging with exactly the sort of people I hoped I'd be associated with when I was a gonnabe writer, many decades ago.
That's not why I'm going, however.  I'm going to pay homage to the man who is the greatest living writer in the English language alive today.  I'd say "in the world," but I can only read the one language.  In that language, however, I am confident.  I have read the works of every writer who might conceivably be a contender and, while I am of course floored by the virtues of their work, Gene is simply the best our culture and civilization (such, as H.L. Mencken would have said, as they are) can boast of.
And he's a science fiction and fantasy writer!  How wonderful!  It's like discovering that the best writer in the world lives next door.  He could have lived anywhere and written anything.  But he chose to hang out with us.  That's just damned cool.
You can read the press release here.
*
Posted by Michael Swanwick at 5:57 PM

That sounds like a great event and some nice company will be on hand. You'll have a great time. I'd love to go to something like that.

Terry Carr produced sixteen brilliant Best Science Fiction of the Year anthologies, and in the second installment, he introduced Gene Wolfe’s “The Fifth Head of Cerberus” thusly: “If 1972 produced a classic science-fiction story, I believe the following novella by Gene Wolfe is it.” After forty years, I believe with all respect to Mr. Carr, that is an understatement…it’s one of the finest novellas ever written.

Kim Stanley Robinson wrote in his introduction to “The Very Best of Gene Wolfe”, “….this is one of the best story collections ever published, a masterpiece of American literature”. No doubt about that. If I were marooned on an island, and could only take the works of a single writer, it would of course be his oeuvre. And how appropriate that is, considering how sublimely he has written about islands!

Dickens, Proust and Shakespeare would have loved him. Someone should re-publish “Letters Home” to show to a wider audience the early Wolfe, the courage and dignity he brings to the page.

Without Gene Wolfe, we wouldn’t have Severian or Latro or Tackman Babcock or dozens of other characters that seem more real and present then some actual people who should have been fictions.

If the Nobel committee had any sense, Mr. Wolfe would have long since visited Stockholm with Rosemary (and perhaps Ursula K. LeGuin as tour guide!)

We shall be there as well!