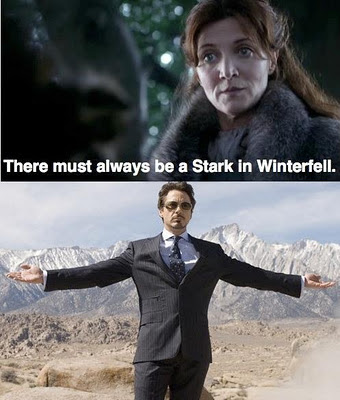 I am not an envious man.  Still, if you work in this field long enough, a sufficient number of your friends are going to be successful that you'll feel a momentary twinge of envy every now and then.  One of your pals shows you pictures of the castle he just bought, or you open the Sunday New York Times and there's an editorial about what the latest novel by the guy you used to hang with means to the nation.  You feel a twinge, you take a deep breath, and you move on.

I've known George R. R. Martin since -- my God! can this be true? -- at least the first convention where he was guest of honor.  That was some thirty-plus years ago, and I remember this fact only because I was present when he remarked how tired he was and Gardner Dozois replied, "I warned you -- when you're guest of honor, they work you like a horse."

So that means I've seen him win two Hugos at one Worldcon, write blockbuster novels, create a major television series (Beauty), beome a megabestseller, and have a smash hit HBO series based on his work, all without the least twinge of jealousy.  Good to see that, I thought.  George deserves it.  More power to him.  And then... and then... the Onion ran a parody news story on him.  You can read it here.

Okay, cleansing breath.  Square up the shoulders.  Move on.  For a moment there, I was genuinely jealous.  But I'm over it now.

I ran across George at the Worldcon this year.  I was hurrying down a hall headed one way and he was hurrying up it headed the other, both of us rushing to make panels we were on.  I altered course and said, "Hey, George.  I just wanted to say hi before you were too big a success to talk to the likes of me."

"Too late!" he said, smiling, and hurried on.

If you're not from the East Coast, you probably don't get it, but he'd just busted my chops.  It's the way folks hereabouts let you know that we like you.


Above:  an image icon I found floating through Facebook.  Didn't make me envious for even a second.  As I said, it takes a lot.

I wonder how the folks running Clarion West are faring with GRRM as an instructor this year... I can only assume they knew what they were getting themselves into. (Imagine how many submissions they're going to have to slog through!)

His books are good, they are well written. But they are not terribly interesting, are they? No offense to Martin whatsoever, as I said, they are good books- I even read the first one. It didn't keep me hanging on enough to pursue the second one (the sequel was bought for me a while back, it's still in the book shelf; I will read it eventually). Now, compare this will say "The Dragons of Babel" a book I can't even recall how many times I have read. Double digits, certainly. "The Iron Dragon's Daughter" I read after Babel, but I've still devoured two or three times, each time the weird, dark, unlikely yet till gritty and realistic prose kept me glued to the page. It's a matter of taste, certainly; yet look how many copies of "Twilight" have been sold...

Knowing George, he's going to be a wonderful instructor. In addition to everything else, he's widely read in genre, was in some classic workshops, and has tons of experience working with writers on the Wild Cards series.

It looks like they have him slotted for the third week. Excellent choice. Just when the students are tired enough to damp down on a perfectly understandable sense of awe on meeting the Great Man.

It was generous of George to agree to this and brilliant of the CW people to think of inviting him.

Avram Davidson used to say, "Of taste and scent, no argument." I've gone back and forth, between rapture and disdain, on Charles Dickens several times in my life. So I'm warier of my negative judgments than I am of my enthusiasms.

And there's no denying that George has bone-deep virtues that simply can't be counterfeited. He . . .

But if I go any further, I'll have to write an essay, and I really don't have time. George has stuff. I'll leave it at that.

For parodies, I'll still take the Locus piece a couple of Aprils ago where they reported that GRRM had ended the series with a short novella (Bantam editors jumping from the windows of the Beast Building, iirc) over The Onion piece.

Note to anyone from Locus reading: please do a Swanwick piece for this year's 1 April issue, just to keep him out of a funk.

The first time I met GRRM was at a reading he did for 'A Storm of Swords' at the Sentry Box, an sf/fantasy gaming shop in Calgary. There was no advertising; it was a fluke my wife and I found out he was there. Maybe 20-25 people came out. He was engaging and gave a hilarious reading of a chapter from the tome and then took questions. One chucklehead was actually fairly insulting and asked how he could possibly guarantee the last books would be as good as the first three. GRRM was utterly gracious and said he'll do the best he could, and of course, that's precisely what we got. He autographed a first pb edition of 'A Song for Lya' and when I told him I bought it off a spinner rack in a drugstore, he told me to to say that very quietly as that was dating both of us. I've met him a few times (briefly) since at readings and conventions, and always refer to him as the guy who's friends with Howard Waldrop. A splendid gentleman.

I saw a panel consisting of George and Howard reminiscing about their friendship from adolescence onward. It was... It was... Oh, wow. In commercial terms, these guys were Jack Sprat and his wife. In literary terms, they were the friends they each deserved.

Lest anybody misunderstand the above, I admire the hell out of these two guys. They're aces, both of them.

Ken: Regarding GRRM and fiinishing a certain series of books ... a few years ago e announced on his blogthat he realized he needed help in finishing the series. So he decided to take on a co-author to help: Howard Waldrop.

Not everyone got the joke.

Er ... the last comment was from me: Michael Walsh

Okay, that was actually pretty funny, Mr. Walsh. (The man who published two seminal HW retrospectives). Though this is Michael's blog, allow me to highjack it long enough to urge people to leap over to the Old Earth site and snag the two collections. And while you're at it, I'll bet Golden Gryphon still has a copy or two of 'Custer's Last Jump', wherein you'll find Waldrop and Martin gleefully sniping at one another. Another fine book.

It could be worse. At least George is as deserving as they come.

It is said that the art of Hollywood is the art of the deal. When I saw my first news item about the TV adaptation, I said, "There may be no writer in science fiction who knows Hollywood from the belly of the beast better than George. I'll bet the contract negotiations were colorful!"
I asked him about it at Worldcon. He said (I assume & hope this is not too confidential; he did say it in a corridor at Worldcon) they paid him $25,000 for the option and he spent $30,000 on lawyers . . .

Wow. That is genuinely wise.