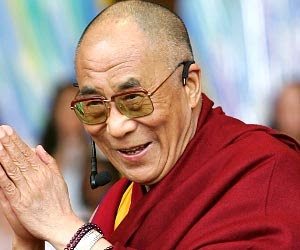 Okay, yeah, I've never met the Dailai Lama.  But I've got to admit that the guy has stuff.  As witness his list of twenty ways to improve your karma.  I'm awfully skeptical about lists of ways to improve yourself and attempts to reduce spirituality to quotable aphorisms.  And yet . . . And yet . . .  I went over his list with my Sarcaso-Meter wide open and I have to admit that he makes a lot of sense.  That would work.  I agree with every word of it.  More than that, I'm going to put it into action.

And as always . . .
I'm on the road again.  This time to celebrate the birthday of Mrs. William C. Porter, who happens to be my mother-in-law and who turns 101 today.  A century and a year and still worth talking with!  And still as sharp as a tack.  May we all live as long as she will and with our faculties intact.
But don't forget . . .
The Isaac Asimov National Science Fiction Day Limerick Competition continues.  Check out Monday's post responses to see exactly how witty the competition is.
Above:  There he is, the man himself.  The only human being who ever resigned the Dalai Lama title while still alive.  If I were still a Catholic, I'd suggest that the Pope take note.  But I'm not, and so my opinion is irrelevant.  I mean that without any sarcasm at all.  Hard to believe though that may be.
*
Posted by Michael Swanwick at 1:51 AM

I'm rather fond of poor BB's:

Sink down in the slime,
Embrace the butcher,
But change the world,
It needs it.

It remains uncomfortable, and that's the only advice worth fetishizing, no?

A few years ago, I had an exceptional opportunity to watch His Holiness (the sort of language I _am_ not inclined toward, right there) The Dalai Lama at Work.
He's the real deal. He effortlessly speaks to the center of whatever he's talking about, and his good humor, even in the most serious moments, is amazing.

Once my friend and I were busy being humbled by some wisdom of the Dalai Lama, and my friend said, "Well, he's not the Dalai Lama for nothing." And then corrected himself, "Actually, he is!" This man was chosen at random from among many children as the reincarnation of the former Dalai Lama, and just look how he turned out. That absolutely amazes me. Talk about rising to the occasion. There's a story idea there, somewhere.