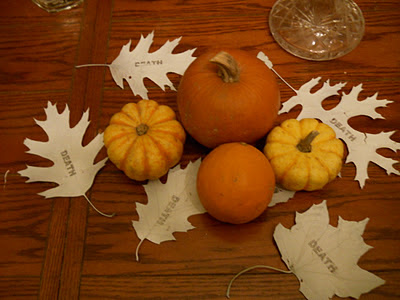 What foods are required for a Thanksgiving dinner to be authentic?  I like to ask that question of friends because the answers are surprisingly interesting.  You'd think the lowest number would be one -- turkey.  But I've found any number of people who said ham.  Or Chinese food.  Or "Anything at all."  These last people are probably the holiday's natural citizens . . . folks who are grateful for all the good things they receive and do not dictate what they should be.  I admire such people.  But I'm not one of them.

For the record, then.  Here's what I require for a Thanksgiving feast to be real:

Turkey (of course)
Stuffing (real sausage-and-bread stuffing, not those things involving oysters or cornbread or pecans)
Gravy
Mashed potatoes
Celery
Radishes (cut into radish roses)
Sweet midget pickles
Creamed onions (these last are so important that I cook them myself)
Cranberry sauce (the jellied stuff with the ridges, straight out of the can, and Mama Stamberg's cranberry relish both)

The smallest number of required items was zero.  The largest -- and I apologize for not having counted; I was standing stunned with admiration -- came from my New England friend Gail, who required three separate cranberry dishes (one relish, but not Stamberg) and, among many other dishes, three different pies . . . and the squash pie had to be baked in a square dish.

It was only when she was an adult that she realized that the reason the squash pie was always baked in a square dish was that by the time the women of her family got around to it, every round pie pan had been used.

So how about y'all?  What do you require for a Thanksgiving feast to be real?


Above:  I spray-painted autumn leaves and stamped DEATH on them so I could strew 'em about the parks of Philadelphia.  But it's been raining all week, so I didn't have the opportunity.  Believe it or not, I found them waiting on the table yesterday, making a natural Thanksgiving centerpiece.

For the record, this year it's turkey, regular stuffing, oyster stuffing (the oysters harvested from the harbor here in town by my 89-year-old uncle), mashed potato, squash, carrot-and-turnip, green bean casserole, vegetable torte, creamed onion, candied sweet potato, jellied cranberry sauce, cranberry and orange relish. Only two pies at dessert, unless someone else has made the cranberry-raisin pie (I'm making the turkey this year so am exempt), plus steamed pudding, Canadian butter tarts, and hard sauce.

I don't think I'd ever heard of creamed onions before this year. I wonder how I managed that.

Creamed onions are essential. They taste great with mashed potatoes and turkey and they're terrific as leftovers. (Pearl onions are best.)

Unknown, I stand aghast with admiration.

Retrospective of this year with required items starred.

I hope yours was wonderful, too.

I won't say this year's feast wasn't real, but we did not have any roast potatoes, only mashed, and I certainly missed them.

I must remember to make sure of the roast potatoes next year.

... I don't suppose I should mention my Beloved and I again had our traditional Thanksgiving cheese fondue? With champagne? And meringues with berries for afters? ... No, better not, I guess. ;-)
Mario