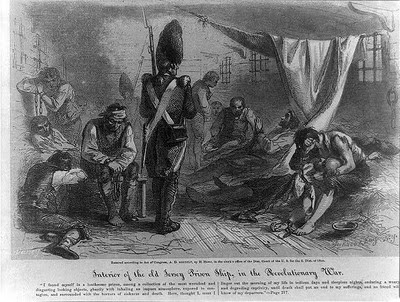 It's November 25.  I trust that all Americans are observing Evacuation Day today, the one time of the year that we celebrate what Linus called, "the weaselly slinking-back of the British sons of bitches to the pathetic scumbag kingdom they called home" at the end of the War of Independence.

Okay, that quote from A Charlie Brown Evacuation Day is the fictitious creation of the Daily Show.  But the holiday itself, celebrating the day when the last of the occupying British troops left New York in 1783, is well worth remembering.  As are the eleven thousand American soldiers who died in the prison ships, when they could have been released if only they'd been willing to renounce their country and pledge allegiance to the crown.

You can find Sarah Vowell's explanation here.  (I believe it's only up for a brief time.)  There's not a lot of laughs, but there is a lot to think about.

It's worth mentioning that, fun though it is to heap vituperation on the British soldiers, they started out the war as good guys -- the troops at Lexington and Concord were under strict orders to put down the rebellion without hurting anyone.  And yet they ended up creating something that Jon Stewart compared to Abu Ghraib.

This is something I wish every leader in every country in the world would think about long and hard.

Any link to Sarah Vowell's explanation?

David - Link is missing, but it was part of TDS either Monday or late last week. A quick search at Comedy Central should find it before Michael returns to report Scenes from a Mall or Six, or whatever traveling he's doing today.

I think this is it.

My bad, and my sincerest thanks to springer for fixing this. I just now restored that link. No idea how I managed to undo it.

In Boston they celebrate Evacuation Day for the same reason, but on a different date. "Coincidentally," it is the same day as St. Patrick's Day (March 17), and Boston city employees get the day off.