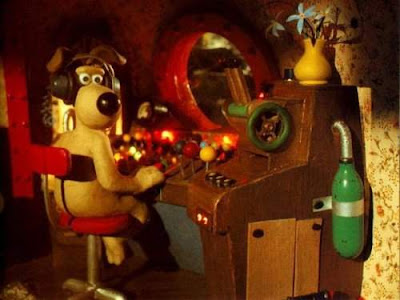 It's been a quiet day.  Lat night I was in Brookyn at Andy Heidel's bar, The Way Station, having a Manhattan (just as Marianne does, they spice their own cherries; making the drink far superior to those with maraschino cherries) and talking with the local SF folk.  Before that, I listened to N. K. Jemisin reading -- and quite well -- from her work and enjoyed a demonstration of stage and movie combat by Mike Yahn.  The moves were terrifyingly brutal, even when you've just been shown that they involve no physical contact.  A great presentation, and I regret only that I didn't write down the name of his friend and fellow stunt man, who sold the demos by convincingly acting as if he'd been punched.  It really is a collaborative art.

And I couldn't help thinking about steampunk because . . .

Wallace and Gromit movies were running continuously on a monitor by the bar, and apparently the Way Station has a weekly W&G-watching event.  So occasionally (not during the readings or demo) I glanced up at the screen and in context was struck by how, well, steampunk that series is.  Clunky Victorian machines that nevertheless work brilliantly, on-the-spot engineering, mad inventions, the lot.

Of course, Wallace and Gromit predate the steampunk phenomenon.  But there was definitely something in the air.  Or water.  Or aether.

Not Above:  I really should mention the Wold Newton Reading Extravaganza, which organized the evening.  Well done, chaps!

Of course, Wallace and Grommet predate the steampunk phenomenon.

Apparently the word "steampunk" was coined in 1987, and I remember that I (and I think many other people) became aware of the term in connection with The Difference Engine (1990).

Wallace and Gromit first appeared in 1989, but in my opinion did not achieve breakout fame until The Wrong Trousers (1993).

So W&G arrived about the same time as, or a little later than, the first outbreak of self-styled steampunk....

I stand corrected, Richard. My thanks.

Oh, and I also corrected my misspelling of Gromit's name. I mention that so nobody thinks it was your mistake.

Now I have the Wallace & Gromit theme song running through my head. And a powerful urge to watch at least one of the episodes tonight...