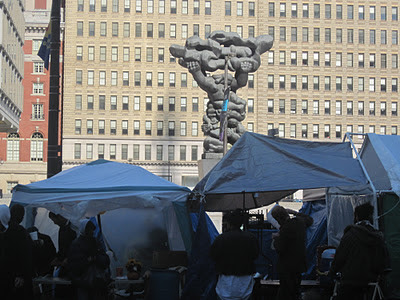 I'm off to the Big Apple for A Tribute to Murray Leinster at the Soho Gallery for Digital Art.  If you're in the area, why not drop by?  It's only seven dollars and these New York Review of Science Fiction reading series events are always lots of fun.

This will be a short blog.  But I thought I'd share the above photo with you.  I took it at the Occupy Philadelphia site and it shows some of the protesters' tents with, looming above them from across the street, Jacques Lipchitz's statue Government of the People.

Government of the People is one of Gardner Dozois's favorite statues.  He likes to point out that it's a graphic portrayal of human beings being crushed by an enormous load of shit.  Over the years I've come around to the viewpoint that that may have been the sculptor's intent.