A Few Heartfelt Words of Praise for the Philadelphia Police 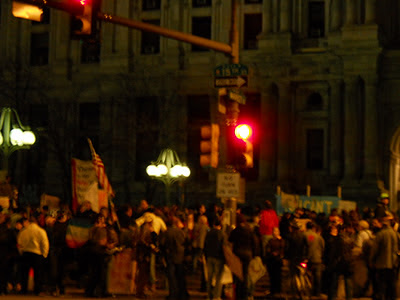 Yesterday Marianne and I went down to City Hall to see if any of our Occupy Philadelphia friends were going to need to be bailed out.  As it turned out, no.  The OP folks were still involved in a complex dance of negotiation with the city, and the Philadelphia police continued to show gentlemanly restraint.  It made me proud to be a Philadelphian.

Which doesn't mean that things won't go Berkley sometime in the future.  But that's just another reason to tell this story while I can.

A couple of years ago there was a big G7 meeting in Philadelphia.  Protesters showed up from all over.  Back in the days when Frank Rizzo was mayor, there would have been some serious police violence.  Luckily, Rizzo was in the distant past and John Timoney was police commissioner.  Timoney was a real hard-nosed type and didn't tolerate unlawful behavior from anybody.  Not even police.

That's the background.  Here's the story.  It's a clip I saw on the news at the time.

The protesters were walking on a sidewalk, obeying the laws and chanting slogans.  At the curb was a police car and, sitting in it, a fat cop looking bored.  Suddenly an -- and I use this term advisedly -- asshole leaned into the car and hit the cop in the face with pepper spray!

In a flash, the cop was out of the car, roaring with anger, and pulling his gun.

And, coming to his senses, the cop did.

It was the most astonishing proof of the value of good training.  The officer on the street knew exactly what to do . . . and two tragedies were averted.  One being whatever might have happened had the cop fired his gun.  The other being what would have happened to the cop as a result of a moment's perfectly understandable outrage.

Last I heard, Timoney was working in Miami.  I hope they deserve him.  The guy walks on water.


Above:  Big rally at City Hall.   Last night.  No violence.  This is what America looks like.