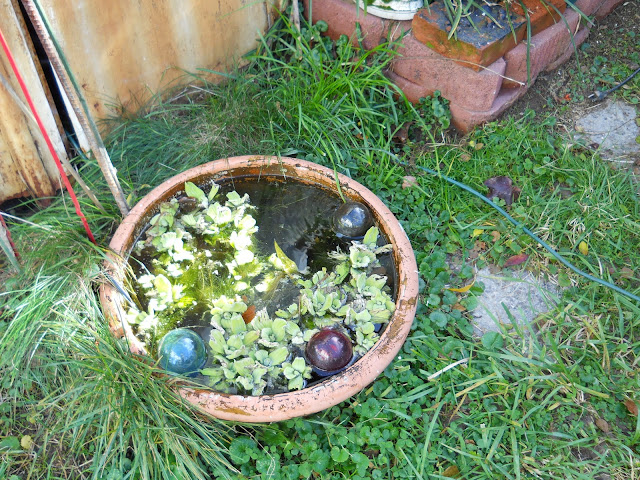 We have a small water feature in our backyard, a pot buried almost to its rim.  That's it up above.  It looks a lot better in the summer when the water lettuce are healthy.  There's a small water pump which doesn't show in this shot.

In the pot we keep a few goldfish.  Last winter, which was colder than usual, they all died, so this spring I bought five and put them in the pot.  We fed them and they grew and thrived.

Over the summer, two disappeared, leaving us with a total of three.  I assumed raccoons.

And then one morning I went out to feed the fish and counted five.  They were all the same size and we hadn't seen any minnows, so their appearance was astonishing.  "Did somebody dump their fish in our pot?" I wondered.

Last August, alas, all the fish disappeared.  I kept feeding them for several days anyway.  The food floated on the surface for a long time, uneaten.  I couldn't find any of the fish when I moved the water lettuce around.  And then...  And then...

One morning I came out to find all five fish floating dead atop the water.  I buried them.  I mourned.  I moved on.

And of course, I stopped feeding them.

This morning, Marianne spotted a fish in the pot.  And then a second one.  I looked, and there they were.

Is somebody playing with my head?  Are we getting drizzles of Fortean fish-rain?  Is it possible that God has a weird sense of humor?

This is worse than New Math.

When goldfish are born they are dark in color, then turn gold as they get older. When a predator arrives they will go into hiding for a while until they feel safe again. Another possibility is eggs coming in on the water lettuce. I once bought a mess of anacharis for a classroom tank of frog spawn and one day one of the kids cried 'it's a fish!' and sure enough we had an infant fish in the scrum of tadpoles.

"Is it possible that God has a weird sense of humor?"

Sounds like a secondary topic for a book you should write. I love to see where your mind leads us readers.

Well, it's pretty obvious that the two you see now are the time travelers who came from last summer. And at some point, you should see all five again, when all five jump forward from last August. But you'll know, alas, that after some indeterminate period, they all jump back.

(...only to find a deadly surfeit of food that has been laid for them...)