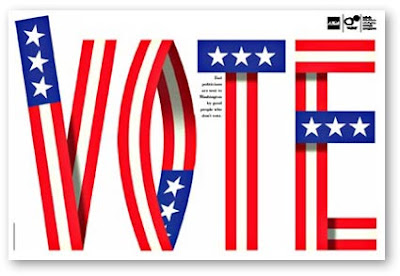 I'm a pretty reasonable guy about most things.  But not about voting.  Charlton Heston will voluntarily turn in all his firearms to the Enemy long, long before they're able to pry the vote from my cold, dead fingers.  Patriots died to give me this right.  I'm not going to give it up just because there are some ballots that fill the soul with dismay.

In all the time since I came of age, I've failed to vote in exactly one election -- and that's because my college roommate put the absentee ballot atop the furnace, where he figured it would be safe, and by the time I got home a hole had been burned all the way through the center.  Every single other election, primaries included, I'm there at the front of the line.

The reason I'm so enthusiastic about representational democracy is that where it counts most -- the presidential election -- my candidate usually loses.  And yet, because there's always hope, and because the system confers a strange kind of legitimacy (the kind that has you muttering that people get the kind of government they deserve), I have never once been tempted to pick up a gun and participate in the violent overthrow of a government that sometimes appalls me.

That's worth a lot.

Above:  I picked that image off of the Web.  I sure hope that those tiny little words I can't render decipherable don't say anything hideous.

"Bad politicians are sent to Washington by good people who don't vote."

Too bad about that destroyed absentee ballot... now that everyone has email access, a determined registered voter these days would practically have to be comatose to miss an election.

And yet around here we still barely crack 52% turnout, and that much only because there's a state ballot initiative that if passed could make it easier to buy booze here (not that there's anything wrong with that).

I recommend working the polls if you have the time and inclination, too! It's a fascinating experience, and my favorite perk of working for the government was getting full pay for the chance to do it every year.

Okay, that's a slogan I can live with. Thanks, David.

Here in Roxborough, those poll worker positions are avidly held onto by some fiercely idealistic old-timers. I like them a lot.

How do you feel about compulsory voting?

Here in Australia voting is not a matter of choice but a legal obligation. Some interesting arguments can be made either way on this one.

That's a tough one. The Tea Party is largely made of former non-voters who felt alienated by the political process, were courted by Karl Rove and brought into the Republican Party, and then broke off on their own when they realized they weren't getting what they wanted from the people who brought them in. Which suggests that if we had mandatory voting, our politics would look radically different from what they are now. Whether this would be a good thing or not . . .

I'm sympathetic to the idea that those who frankly can't be bothered to vote are not going to make a good contribution to the political process, but conversely I'm very nervous about any slippery slope which could lead to a supposed democracy with a voting class and a non-voting class.