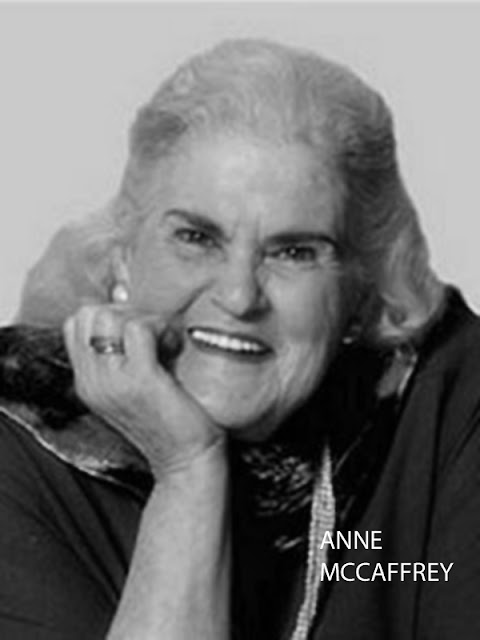 Today is an international day of mourning for science fiction readers.  Anne McCaffrey is dead.

You almost certainly knew this already.  The news spread faster than wildfire.  Most SF writer blogs will devote today to the great lady's passing.  Memories will be shared.  Words will be dropped at her feet.

I met Ms McCaffrey only once, at a Forbidden Planet signing in London in the 1980s.  She had endless lines of fans -- mostly young women wearing natural fabrics in earth tones -- each with the sort of expression a devout Catholic might have in the presence of the Pope.  I had a much shorter line of young men in punk leather who shrank away from me in horror when I said I was working on a fantasy novel.

During the time when my signing was done and McCaffrey's was still going on and on and on, I reflected on the fact that almost every one of her acolytes clutched an enormous stack of her books.  There's my mistake, I thought.  I haven't written a tremendous number of novels that readers love passionately.

There is much that could be said in praise of McCaffrey's work.  But I'll leave that to everybody else.  She wrote a tremendous number of novels that readers love passionately.  That's the epitaph that we're all working toward.

And now she has it.

Rest in peace, Anne.  Thanks for the books.

I was 15 years old, at a book store in Hawaii, looking for a novel about dragons to read on the plane home. I had already read the entirety of the collection of McCaffrey available there, so I picked up a book by a name I recognized from my copy of "Best of Science Fiction, 1984."

That book was the Iron Dragon's Daughter, and here I am.