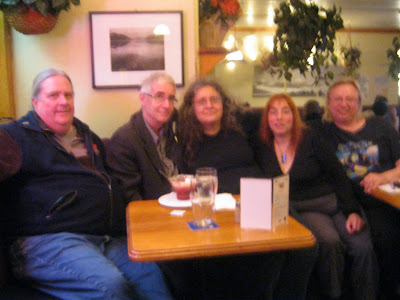 When Marianne and I arrived in Ontario, Rob Sawyer called to invite us to SFContario's monthly Third Monday pub meeting at Orwell's in Etobicoke.  So of course we went, spent the entire evening talking with some very charming people, and had a completely splendid time.

Pictured above are the last surviving pubbers, still there long after weaker souls had given up and staggered away.  The picture is maybe a little blurry but I attribute that to their having had a pint or two.

It doesn't show, but a lot of business got done there last night.  Not by me.  I was on vacation.

Marianne pointed out two errors in what I said about the Dragon Staircase the other day.  The first was that I didn't just enclose coins but also a handful of Dragon Dice, the purpose of such enclosures being to charm and puzzle whoever finds them when next the stairs need to be replaced, a century or two from now. And I'm pretty sure the lucky discoverers will find Dragon Dice baffling.

The second was that half of the reason the staircase was given that name was that, yes, it leads up to my office where a plaster dragon can be seen bursting out of the top of the chimney-ruins.  Though Sean never told me about this until he was a teenager, when he was little he was afraid to go into my office when it was dark, because of that dragon.  He only got over that fear when he was tall enough to reach in and turn on the light switch before entering.

If I had known, that dragon would have been gone so fast its plaster head would have spun!  But small children are not good at sharing their secret fears, alas.


Above:  Chris, Murray, Catherine (or possibly Katharine), Mara, and Diane.