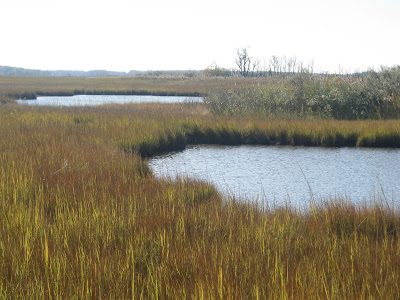 I played hooky yesterday -- sometimes you just have to -- and went down to Bombay Hook, the saltwater marsh wildlife refuge in Delaware.  It's a beautiful place and although, inexplicably enough, there were no snow geese (come on, guys! it's migration time!) but there were all the usual ruddy ducks and shovelers and mute swans and harriers and so on.  Plus a few yellow bellied sapsuckers.
And, oh yeah, we saw a pair of bald eagles fly in low over one of the ponds, panicking the geese and avocets there.  One struck, and then carried away a warm avocet carcass, trailed by his or her mate, the two screaming at each other proudly, off to a romantic meal of warm avocet tartare.
Life doesn't get a lot better than that.
And because I've been far too serious of late . . .
Why didn't anybody ever tell me about the Sony Rolly?  It's a music player which . . .  Well, it rolls, see?  And it has a couple of lights which turn on and off and change color.  And flaps on the ends which . . .  It's kind of hard to explain.
Which is why Sony discontinued it.  It's hard to sell a piece of electronics whose purpose you can't even explain.
Also, they priced it at $350.
Three hundred fifty dollars for a small (it fits neatly in one hand) and perfectly pointless item of electronica that serves no known purpose and for which there is no discernible market.  No wonder it went down.  About a year ago, Sony remaindered all its stock at $99 a pop.  And, oh, had I known, I would have run right out and bought one!
Unfortunately, the only way to get one now is on eBay or maybe an antiques shop . . . and the prices are clawing their way back up toward what they cost when they were originally released.
Anyway, here are a couples of videos.  There are plenty more on YouTube.  I would've posted the one with four different color Rollies (or is it Rollys?) dancing in unison, but it began with a commercial, and I figured watching a commercial as the price for watching a commercial was a bit much.


God, I love that!  Livin' La Vida Loca -- one step closer to a future in which our machines have have all our fun for us.

Sony obviously has problems identifying its audience correctly and marketing to them. (They, like most game companies, seem blissfully unaware that their market is not exclusively adolescent / youngish males.) Not that I would have paid $400-odd for this thing, but I'd have snatched one up at $99 ... however, like you, I'd never heard of it. (And it does seem to have been Windows only, so I couldn't have used it, anyway. Just as well, I guess. [sigh])

One of the many YouTube videos I didn't post had a painfully shy young man sit down on a London sidewalk, take out his Rolly, and turn it on. Young people came to gawk and then dance, while he sat sullen and wordless.

Yes! I thought. I used to be him. And I would have welcomed the chance to make people my age happy and maybe, incidentally, think well of me.

A pity it was only available for a very brief period and to people with more money than I had then.