Julian Schnabel at the Art Gallery of Ontario 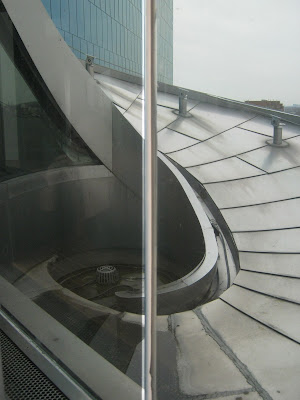 Marianne and I went to the Art Gallery of Ontario today, one of a flock of museums worldwide that have been Frank Gehry-ed in  the wake of his triumph in Bilbao.

When I go to a museum, I'm hoping for two things:  To discover a new artist and to learn something about a name artist I don't have a good handle on.  So it was a successful day.  There was a major exhibit of Very Big Canvases by Julian Schnabel.   There was a look back at Eva Hesse.   And there was a very big show by the I-presume-emerging Ontario artist Shary Boyle.

Boyle is one very strange cookie indeed.  The AGO is pushing her creepy-kitschy small ceramics hard, but I found her large installations the most interesting.  Particularly her life-size soft sculpture of a flat black skinned blond spider-woman tangled up in her own web.  It was a creature right out of the Jungian depths.

Hesse was a German-born American sculptor who died at the terribly young age of 34 in  1970.  There's a touch of revulsion in her work and rather a lot of evocation of the body -- particularly skin.  Alas, the AGO had only one of her sculptures.  The rest of the show consisted of what were labeled "studio works," bits and pieces of this and that which she used to build models of what would later be her sculptures.  Which is to say, they were nothing she would have called art.  But it seems like her real art would be a bear to move and to conserve.  So maybe they had no choice. 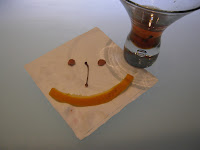 I'm still learning Schnabel's art (this is the first time I've seen a large number of his canvases in person), so it's early to comment on him.   But at least the task is begun, and for this I am grateful to the Art Gallery of Ontario.

After several hours hard viewing, we retired to Frank's, the in-museum bar, where we had Back Stages (a variant on Manhattans, essentially).  And we were, as you can see, happy.

Above:  A photo taken from the Allan Slaight and Emmanuelle Gattuso Staircase -- a "destination staircase" central to the museum, showing a detail of the Gehryesque exterior.