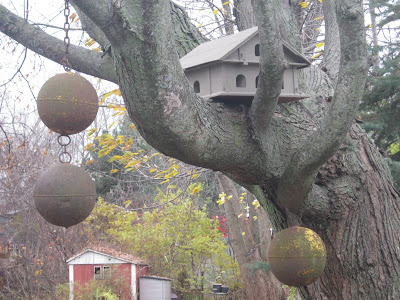 It's been another pleasantly odd day in Toronto.  Marianne and I went to Paddington's in the St. Lawrence Market for lunch and had peameal bacon sandwiches -- which for some reason Paddington's calls "the Big Oink."  Delicious, though.  Then we took the ferry to Ward Island and wandered about.

Ward Island is an odd little place -- lots of small houses on small yards off of small roads where motor vehicles are prohibited, and each yard featuring decorations or sculptures or eccentric decorations such as would mark one as the neighborhood oddball if everybody else weren't doing something completely different.

It's a congeries of individuals is I guess what I'm saying.  And their neighborhood association has a permanent croquet lawn.  With astroturf.

Marianne was ready to move there today.  Me, I want to come back in warm weather and spend a full day there.

In the evening we went to see Cinderella at the Four Seasons Center.  It was first-rate, involving, and well worth the money.  But during the intermissions, I counted the people streaming out of their seats and those remaining and discovered that the female to male ratio was roughly eight to one.

Eight to one?  Come on, guys!  Can you really be that afraid of a chick ballet?  Man up!

Above:  A typical Ward Island backyard.  Doesn't it make you want to write a fantasy story and set it there?

If only all neighborhood associations were that cool.