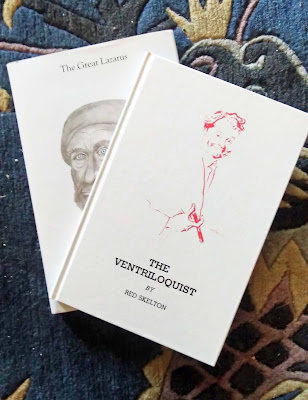 Red Skelton was once once of the most famous comedians in the world. He and Marcel Marceau each claimed the other was the greatest mime ever. He stared in movies. He had a wildly successful TV show.

But was he a writer?

While he was alive, articles about him claimed that he wrote a story a day and never published any. Supposedly, they would appear after his death. But they didn't.

I've wondered about this for decades. But now at last I know. A friend pointed me toward the Red Skelton Museum's website, whose museum has three hardcover "novels" for sale at the extremely affordable price of five dollars apiece. So I bought two and red them.

I did a page count on The Great Lazarus and by estimation, it runs to fifty thousand words, which makes it novel-length, though by today's standards rather short. The Ventriloquist, at roughly one-third that length, is a short novella. An author's note inside the latter clears up some confusion: Skelton found time to write "five musical selections every day;  an outline for a story; and a love letter to his wife, Lothian." This is a respectable amount of a work for anyone, but imaginable where 365 full-length stories a year, strains credibility.  From the dates of publication, it seems that Skelton published the books himself, in editions of 5,000, while he was still alive but did not make much of an effort to distribute them.

But what about the fiction itself?

The first thing that has to be said about these stories is that Skelton was clearly a self-taught writer and that he never ran either past an editor. Who would have told him that the second-person possessive was not you're. There were other clumsy aspects. I really wish I could travel back in time and spend a week teaching the young Red Skelton his craft. Because all the amateur-writer mistakes he made were easily correctable. And the stories are good.

Not great, alas. But Skelton was an entertainer and the plots move briskly along. The Great Lazarus details several adventures of the eponymous carnival performer. The Great Lazarus's act is simple: He dies on stage. Literally, I mean. Local doctors examine him and declare him dead and then he comes back to life, to thunderous applause. Whether this is real in a magical-realism kind of way or a stunt is never explained. But he employs this talent to steal the jewelry of several rich women--at least one of whom he marries and all of whom are so wicked as to deserve no better--in a series of clever scams. The book is written as if it were a fix-up of a series of short stories published in pulp mystery magazines, and that's probably what they should have been. An improbable finale brings together all of Lazarus's worst enemies and he is almost executed by the French police. Luckily for him, there is an equally improbable happy ending.

I can't say that I'm proud of myself for enjoying this, but I did enjoy it.

The Ventriloquist is rather better. A vaudevillian named Charlie Kay comes to a small town in the Midwest four days before Christmas. He's nearing the end of his career, ventriloquism is nearing the end of its popularity, and vaudeville's days are numbered. Plus, the theater is too small and its manager too cheap. This is a world that Skelton knew well, and it has an undeniable low-rent charm.

For a time, the bad news keeps building. But Charlie has a good heart and the brain of a con man. He meets a young acrobat, who has tired of theater life and rather easily falls for him (her characterization is not very deep, but his dialogue is not bad), and manages to save a life and make himself reasonably affluent without actually harming anybody. It's a sweet story, sentimental without being maudlin, and, as he did in The Great Lazarus, Skelton throws in the occasional comic line, delivered by his protagonist in a manner where it reads naturally.

This would have made a great hour-long black-and-white Christmas special back in the day. Starring, of course, the inimitable Red Skelton himself.

You can find the website for the Red Skelton Museum here. Or go direct to the museum shop here. 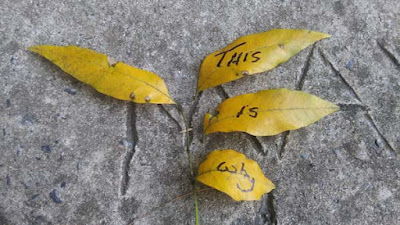 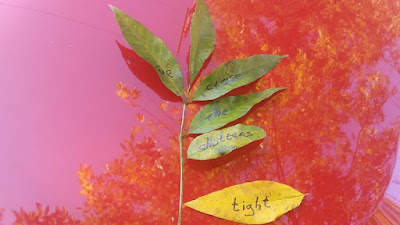 Plain text: This is why we close the shutters tight

Posted by Michael Swanwick at 1:41 PM

Skelton edited a book of ghost stories - unfortunately I read it far too long ago to be able to recall the title, but I don't think that he included any of his own work in it. He did include Wilde's The Canterville Ghost, however, so his taste was good, at least.

The collection is titled "A Red Skelton in Your Closet" published in hardcover by Grosset & Dunlap in 1965. Three paperback printings followed.