The Phantom in the Maze 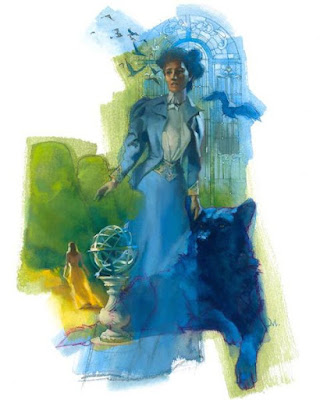 "The Phantom in the Maze," the seventh and latest story in the Mongolian Wizard series, has just been posted on Tor.com. With this story, all the pieces are in place, the gloves are off, and the war can be fought to its inevitable conclusion.

This is only the second series of stories I've ever attempted, unless you count "The Raggle Taggle Gypsy-O," which introduced Crow and Annie, true lovers and extremely difficult people who might yet get a second story, and possibly more, someday. The first series, of course, are the Darger & Surplus stories. But those are different in kind from what I'm doing here. They're lighter, for one thing, and the reader knows that the two rogues won't come to any serious harm. Whereas Kapitänleutnant Franz-Karl Ritter exists in deadly danger of his life, his limbs, and his soul. Were he suddenly teleported to Westeros, his situation could be no more dire.

But the man difference between the two series is that the Darger & Surplus stories have only the loosest of structures. Yes, they're on an accidental journey around the world and, yes, their travels will have consequences. But I could add or subtract stories without changing the overall shape. I could send them to Tahiti or the North Pole, if I wished, without changing how they will ultimately end up. But the Ritter & Sir Toby stories exist in a moral universe in which all acts have consequences. Every victory leaves a scar. Every lost love has its effect on loves yet to come. In this way, Ritter's life is very much yours and mine.

It also means that the series has to have an overall structure and pace.

This story marks the one-third point in the overall arc. My best estimate is that there will be twenty-one stories total before Ritter reaches the end of his adventures. But now, as I said, all the pieces are in play. And we finally get to learn what morally dubious decision Sir Toby feels that the events in "The Pyramid of Krakow" justified.


You can read "The Phantom in the Maze" here.  Or just go to Tor.com and poke around. There's always a lot of interesting stuff to read there.

The good people at Tor.com have put together a page listing all the Mongolian Wizard stories in the order in which they appear, with links to the text for each.  You can find it here.


Above: Art by Gregory Manchess. The beautiful illos he's doen for each of stories so far have been a blessing and a joy for me.

I'd love to be reading this series, but hate reading at my computer. Any plans for a collection down the road?

Liked it. The temporal play raises the inherent interest, seriousness and possibilities considerably. Ritter's world could even collapse into our own magic-less history by the end.

My plan is to write a full book's worth of stories -- 21 is my best guess -- and then find a publisher.I won't go into details, but i'm confident I'll have no problem doing so. It's just going to take me a few years to write the next 14 stories, because I have so much else to write in the meantime.

And I empathize with your difficulty with computer screens and fiction. I have the same disability myself.

JD, If you have a Kindle, you can install an app on your computer called "SendToKindle" and then you can read the story on your Kindle. I imagine other e-readers have similar set ups. I've been doing that with the latest entries in this series and I think it works better than reading from a computer.