An Eileen and Michael Christmas! 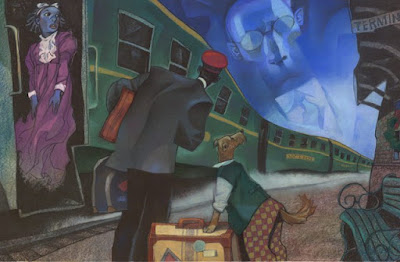 It's the holiday season, so it's time for a holiday story. And not just any story! "The Trains That Climb the Winter Tree" combines Eileen Gunn's twisted sensibilities with the warmth and compassion that are the hallmark of my own work.

The story was published a couple of years ago at Tor.com and the link to it is below. Looking over the comments, I was struck by how bleak many readers thought it was. One, who was kind enough to say he liked the story anyway, thought it was "the very antithesis of Christmas."

So, for those who are interested in learning my understanding of the story, an explanation is below. Nobody has to read it. But if you do, it's best that you read the story first.

You can read "The Trains That Climb the Winter Tree" here.

And a previous blog post explaining how it came to be written here.

So why is this not what Marianne likes to call "one of Michael's bleak little fables?" It certainly begins bleakly, and that was all my fault because I was trying to start the story off with a bang. As usual for my collaborations with Eileen, we went into the story with no idea of where it was going to end up or what it was going to mean. We were just egging each other on, trying to surprise one another, playing little pranks on the partner-in-literature.

But all the time we were working on it, I was trying to figure out what the story meant.  And when I finally did figure it out, it was possible for the story to end.

There were two insights. The first was that Lord Snow, merciless, brutal, and unstoppable by anything short of an angel (which Mr. Chesterton was; there was never any doubt of that), was Entropy. The second was that the elves that served him were time.

So it was time that killed all the adults. Once I realized that, a happy ending became possible.

That, anyway, is my reading of the story. You don't have to agree with it if you don't want to. I've never asked Eileen what she thinks was going on.

Reading this story has become a holiday tradition for me, and I wrote about it in the hopes that it would become so for others, too.

You can find that mention on Northwest Book Lovers.

And you justly praised "Winter Solstice, Camelot Station" too! I remember saying to Marianne, "Do you realize this is the only Christmas card we ever received that won a World Fantasy Award?"

"It's the only Christmas card ANYONE ever received that won a World Fantasy Award," she replied.