A Weekend in the City 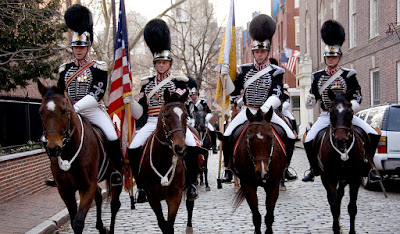 Some time back, I met an old college friend who now lives in in a part of Virginia that appalls most of those living in the Blue Mountains with its isolation. "People ask me why I live where i do," he said. "It's quiet. Very, very quiet."

De gustibus non est disputandum. I live in the city for different reasons entirely. I had a relatively quiet weekend, but it was still colorful.

Friday night was spent at the Pen & Pencil Club, America's oldest journalists' club, hanging out with  the usual, admittedly rather louche crowd.

Saturday, Marianne and I went to the Punk Rock Flea Market for a little Christmas shopping. Parking was tight, but we found a place outside the Electric Factory, which was having its annual Running of the Santas. There were literally hundreds of young people dressed as Santas, Santettes, and elves.  Just seeing them had to raise one's spirits. It made the warehouse full of young people dressed in a style that peaked before they were born look downright stodgy by comparison. Later, we ran past Big Blue Marble, one of my favorite bookstores, to buy more presents.

Sunday morning, I went out for bagels and noticed that the Roxborough Ridge Runners (restorers of classic and antique cars) were gathering for an event in the Acme parking lot. In the afternoon, we visited Tom Purdom and then drove to Trinity Church where, many years ago, I was the unpaid volunteer half of the staff for the Wilma Project, back before the Zizkas took over and turned it into a theatrical powerhouse with a bright, shiny home on the Avenue of the Arts. The Philadelphia Chorus presented their Winter Concert, including selections from Benjamin Britten's A Ceremony of Carols and Will Todd's Mass in Blue.  Tenors Aaron Jones and Justin Gonzalez were knockouts.

This last, I was almost late for -- I arrived on the minute -- because driving to the concert, I got caught behind the First Troop Philadelphia City Cavalry and so was slowed to a horse's pace. That's them up above. The First City Troop was founded in 1774 by the First Continental Congress, so this was a delay that literally could not have happened anywhere else.

As I said, it was not a particularly busy weekend (though busy enough that I couldn't participate in the cookie exchange at the Spiral Bookcase, another favorite). But neither was it quiet. Some like it quiet. But others, like me, go for that joyful noise thing. To each according to their tastes. This is why I live in Philadelphia.


And speaking of Tom Purdom...

The dean of Philadelphia science fiction is still in rehab, though there remains a chance he'll be home for Christmas. You can -- and should -- send cards, letters, fruitcakes, whatever to him at:

There is something about living in Philadelphia.