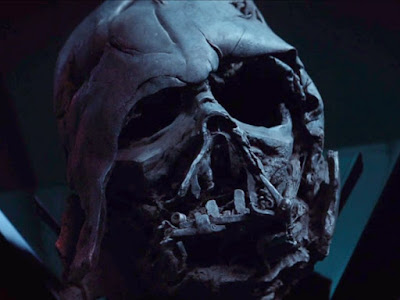 There is a moment in the latest Star Wars movie, seventh in the franchise and first under the aegis of Disney, that epitomizes this moment in popular culture. Han Solo, old and with his disillusionment written on his face, a man whose dreams have fled him, whose life has been a disappointment, who can only count himself a failure, stands at last inside the Millennium Falcon and closes his eyes in relief. He is home. Briefly, he can imagine himself as he once was, young and filled with hope.

So, too, the movie's creators hope, with every fan who was there, almost forty years ago, when the first and best SW movie astonished the world, and spent the ensuing decades trying hard to pretend that the last three (or, I would argue, the last five) movies never happened. A great deal of intelligent thought went into this movie. Point by point, all the beloved moments from its originator were ticked off. Cute bot? Check. Interstellar dive? Check. Planet killer? Check. Princess-turned-general Leia? Check. All of it vividly reimagined, so that the viewer never knew what was coming and so that it all felt original. This is an accomplishment that should be admired.

Meanwhile, however, on the undercard, every new character is struggling with the deadening influence of his or her predecessor. Kylo Ren does a Charles Foster Kane on the furniture because he cannot live up to the villainy of Darth Vader. Later, he kills his true father for the same reason. Rey and Finn are both trying desperately to be the hero of a movie that is all about finding Luke Skywalker so that Dad can make everything right again. Even cutebot BB-8 is heartbroken about her inability to connect to R2D2, who can only be her mother. In the audience, all the Millennials, though they don't know it, are waiting for the last character from the first film to die so they can have their own Star Wars. One that Mom and Dad hadn't claimed as their own, long before the younger viewers were born.

Oedipus would be right at home here.

So what is Star Wars: The Force Awakens about? It's about the struggle to create a new and successful Star Wars franchise. Nothing less. Nothing more.

Recently, I watched Ant Man, a movie about a superhero so deep in the Marvel pantheon that even its protagonist had trouble taking it seriously. It was your quintessential B movie. Its special effects cost a fraction of those of SW:TFA. The matters ostensibly at stake were negligible by comparison. But it was about something: the relationship between fathers and daughters.

So final score? For special effects, explosions, people running, and efficiency of reboot, it's SW:TFA as the clear winner.

But if you want to see a movie, Ant Man wins hands down.

Mom and Dad, hell. Pop-pop and Nana can claim the original!

Upon its head the nail you have struck.

I too thought the first movie was vastly superior to the two sequels in the first trilogy. And I agree the Oedipus thing is getting very old indeed. This rehash of the structures of the first movie is lazy writing. Fan service is possible without treading the same path over again. But despite everything this movie wasn't that bad. At least it was far and away superior to the ghastly second trilogy.

I think Rey and Finn are good characters too. It's not their fault as characters that there will be this apparently inevitable Luke-as-failed-master-turned-recluse doldrum in the next movie. And training montages (2), sigh. One can at least hope that after a mandatory Skywalker star turn that Rey and Finn will take over all the real plot and action scenes thereafter.

Yes, deeper issues and stronger and more appealing characters! That's why I consider "Fringe" a better series than "The X-Files" even if "Fringe" requires one to buy into some really wacko premises.

Michael, I think George Lucas would agree with your comments. Just hours after my comment above I saw Charley Rose interviewing Lucas, who is a harsh critic of some of his movies. He made it clear that STAR WARS "is not about space ships, it's about fathers and sons." He sold out "to the white slavers" (that's a direct quote!) because he wants to spend the rest of his career producing and making experimental and non-commercial films with his own money so the 200 people working for him don't suffer if those films do badly at the box office.