The Wailing of the Gaulish Dead 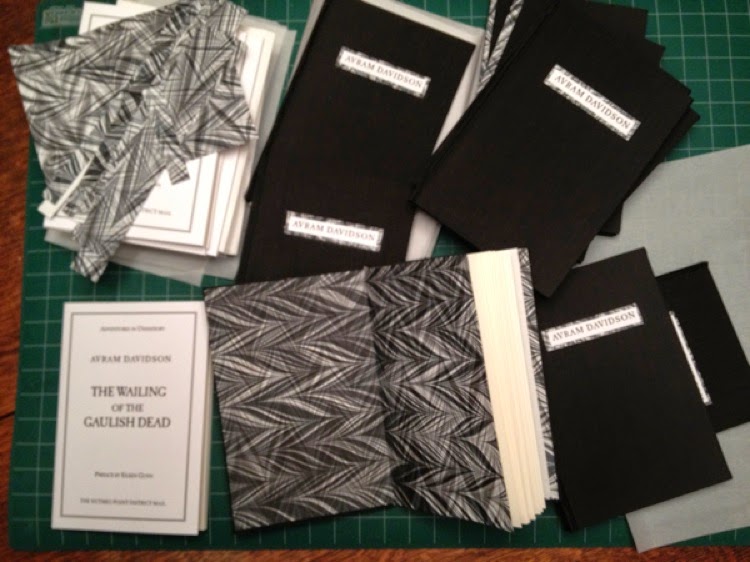 Avram Davidson was, poor bastard, one of the greatest American short story writers of the Twentieth Century, an achievement not unrelated to the fact that he died in poverty.  To make matters worse, he was also a master of the discursive essay, an art form whose monetary return per hour spent on research makes short fiction, and possibly even poetry, seem lucrative by comparison.

So when Davidson wrote The Wailing of the Gaulish Dead, unpublished in his lifetime, almost lost after his demise, preserved in a single typescript copy by collector Iain Odlin, and now available from the Avram Davidson Society and the Nutmeg Point District Mail as a limited edition handsome crafted hardcover with a cogent and lucid introduction by Eileen Gunn, there was no incentive for him to write to please anybody but himself.  His late prose style, legendarily daunting, is to be found here in early blossom.  This is a typical sample:

Time and again I have found that “even when I do not seek, I find” – serendipity this may be called, it being understood that what one finds is found while seeking something else – not always, alas, but often, often, often:  once one has determined to find something out, it will find itself out for you.  Often.  To invent an example, suppose that you have become interested in butterflies as articles of human clothing.  You may find information under butterflies, you may find it under clothing; then again, you may not.  The matter may be half-abandoned, half-forgotten . . . for a while.  And then, without a thought in the world as regards butterflies as articles of human clothing, casually you begin a book about – say – Virginia Woolf.  And there, on pages 27 and 28, you find yourself reading, as it might be, that Virginia Woolf’s eccentric cousin Algernon Stephen as a young man spent a year in Fantaanango, a country in the Central Indies where to his astonishment he found the natives adorning their clothing with the wings of gorgeous butterflies.  In one of his frequent letters home, he wrote . . . .
And so on.
I repeat:  this example is fictitious.

Now, either that oft-reworked, cunningly crafted sort of prose appeals to you or it does not, and if it does not you might as well keep on moving down the midway where there are booths galore catering to your particular tastes.  But for those few – those “happy few,” as the Bard would have it – who can savor the great man at his most Davidsonian – surely there are enough of us to sell out this edition of 200, though the text of the essay is only 37 pages long and it costs $25.00 plus postage – there is only one place to get it.
This essay is one of a series, almost all of which were collected in the Owlswick Press collection, Adventures in Unhistory (later reprinted by Tor Books).  But where those others largely explored the origins and lore of various supernatural creatures, The Wailing of the Gaulish Dead deals with… well, to say exactly what it is about would be to give away the essay’s conclusion.  Davidson began with a phrase, apparently his own, which popped into his head one day and which serves as the title of the essay.  Intrigued, he set out to discover exactly what he meant by it.
Thus begins a voyage through the mind of a brilliant autodidact, a man who engaged in esoteric research not for profit or academic survival but simply for the fun of it.  Those who can enjoy such company on a journey with no obvious direction or destination know who they are.  Others, as I said, should keep moving.  I witnessed a reader reach the end of this essay and burst into delighted laughter.

You can find the ordering page for the book here.


Above:  An image of the binding of the book taken from the Avram Davidson Society ordering page.  The review first appeared in The New York Review of Science Fiction and is copyright 2014 by Michael Swanwick.

Posted by Michael Swanwick at 6:24 AM