Samuel R. Delany and Me at the Joyce Kilmer Service Area, March 2005 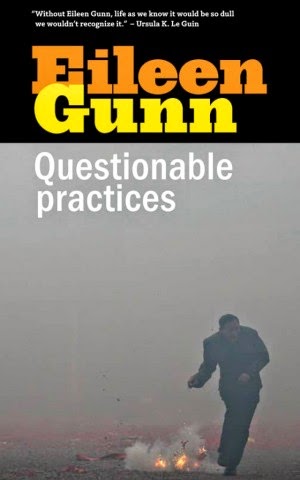 Not all things we are nostalgic for should be preserved.  I personally feel a sense of loss for the chatty intros that science fiction collections used to have before each story, explaining how they came to be. Chiefly this is because back when I was a teenage werewolf, I studied those intros carefully, gleaning tiny crumbs of writing lore that the Great Authors would occasionally inadvertently let drop.  But also because any extinct or near-extinct prose form is to be lamented.

The late, great, and greatly missed editor Jim Turner sternly informed me on the occasion of my first collection  (Gravity's Angels, Arkham House), that such intros were a self indulgence which he would not put up with, and in my experience in matters editorial Jim was inevitably right.  So that's settled.

Nevertheless, the one regret I have regarding Eileen Gunn's exemplary new collection, Questionable Practices (her second! and this one only took ten years! she's definitely getting faster!) is that it isn't fat and unwieldy with intros, outros, afterwords and story notes.  So I'm going to provide one for her -- and it's not even for one of the stories we co-wrote!

Living on opposite coasts as we do, Eileen and I don't get to spend much time together.  But when we do get together we have some very intense conversations because for unknown reasons she is one of the few people with whom I can talk seriously and at length about writing.

So it was sometime in 2005 and Eileen and I were sitting on the porch of a house high up on the slopes of San Francisco, watching the sun set and then green rivers of fog rolling down from the mountains.  We spoke of many things.  It would amaze most of my friends to hear that I didn't make a single joke.

Not long before, for reasons of plot irrelevant to this narrative, I had driven Chip Delany from Philadelphia to New York City.  He needed a ride and I was happy to be able to help him out.  So, along with many other matters, I told Eileen about the quite interesting conversation we had.  (I betrayed no confidences in doing so, because it wasn't a confidential kind of conversation -- we were discussing facts and ideas.)  One thing I shared was Chip's explanation of the virtues of Guy Davenport's short fiction.  Davenport was a critic of dazzling lucidity.  But in his fiction he wrote for a small and rarefied audience -- and the point of much of his work relied on the reader knowing specific information (in the story in question, it was of a lacuna in Kafka's biography) that was not contained in the story.

Why on earth Eileen should decide to write a Guy Davenportly story about that journey, I have not the slightest notion.  But she did.  Sometimes a writer's brain catches fire with the desire to write something for which there is no explanation.

The story is, as the subtitle puts it, OUTPUT FROM A NOSTALGIC, IF SOMEWHAT MISINFORMED, GUYDAVENPORT STORYBOT, IN THE YEAR 2115.  Much of what is written is deliberately not so.  It's Eileen who knows to say "Nyemnoshka," when asked if she has any Russian, not I.  But bits of it are factual, though I'm not going to tell you which.

Save for one.  When I said, "I'm a burger kind of guy," the white-bearded semiotician really did reply, "So am I."

So there we are, Chip and I, the two most ordinary guys you'll ever meet in the Joyce Kilmer Service Area.

I forget whose place that was where we had the conversation.  I know that Eileen was house-sitting for someone.  I have a nagging suspicion that it might have been Ellen Klages.  If so, I just want to say to Ellen that I was the one who turned around all the little figurines on the fireplace mantle.  Eileen had nothing to do with it.

Posted by Michael Swanwick at 1:16 PM

Thank you, Michael. Of all the stories, that one most needed an introduction and an affirmation that the story-telling robot is seriously misinformed. Climate change has come upon us so quickly that that the depiction of a March day on the Jersey turnpike being hot and humid has lost the effect of announcing a work as satire.

The story's origin lies in my reading a particular Guy Davenport story -- which one, I forget. If I recall correctly, it was set in the first century AD and involved an account of a journey by a famous writer or historian. Davenport is a marvelous writer, and I was completely carried away by his descriptions of the weather and locale, by the thoughts of the traveler, by the things he encountered. As I was finishing the story, I wondered, "How does Davenport know all these things?" It must require an enormous erudition -- which of course Davenport had: he was at least as erudite as Avram Davidson (with whom he corresponded), and this is very erudite indeed. At first I was depressed, thinking, "I don't know enough to be a writer." And then common sense responded: "Don't be silly. Davenport makes things up and then convinces you they they are true. That's what writers do." And I thought, "I can do that."

That tiny bit of quoted dialog -- "I'm a burger kind of guy." "So am I." -- was what I built the rest of the story on. It stuck in my mind because, although I don't know what kind of a fast-food guy Samuel R. Delany is, you, Michael, are definitely a burger kind of guy. Ellen Klages and I had lunch with you at a burger place in Philadelphia in September, 2004, and I have to say that I have never seen anyone who is more a burger kind of guy than you are. That is probably why you remembered that exchange and why you quoted it to me in the first place. Frankly, I don't actually remember anything else you may have said about that trip, except that it was on the Jersey turnpike. I think you mentioned Davenport and we talked about him, and that's why you and your hamburgers came to mind when I wrote that odd little piece. I really had written it only to amuse you, so in that sense it was written for a small and rarefied audience.

It certainly should not be read as conveying anything that you and Samuel R. Delany actually talked about.

PS: Michael, I have noticed that whenever you visit, all the tiny lead civilians turn their faces away from you.... Now I know why,