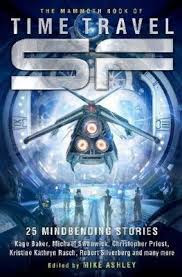 I'm in print again!  That always makes me happy.  This time it's "Legions in Time," which has been reprinted.  It appears in The Mammoth Book of Time Travel SF.

I wrote "Legions in Time" because I'd been feeling grumpy about how slow-spaced too many stories are nowadays.  Slow-paced for no reason, I mean.  So I thought back to A. E. Van Vogt's classic, "Recruiting Station," which just speeds along like racehorse afire, and thought I'd try to write something similar.  I stole the basic premise, in fact, and the dreary future that my protagonist, Eleanor Voigt found herself in.  The story I wrote turned out to be very different from Van Vogt's, but I threw in a couple of details lifted from his story just so it would be obvious that I wasn't trying to hide the story's origin.

Then it (cough!) won the Hugo Award for best short story.

This prompted some of Van Vogt's fans to rather angrily demand to know just what I meant by the story.  And I rather shamefacedly had to admit that I hadn't really meant much of anything.  I was just having fun.  Because, let's be honest, it's terrific fun to write something like "Time criminals of the Dawn Era -- Listen and obey."

Anyway, the book looks to be a terrific anthology, as anthologies edited by Mike Ashley tend to be.

Caveat Time Traveler by Gregory Benford
Century to Starboard by Liz Williams
Walk to the Full Moon by Sean McMullen
The Truth About Weena by David J. Lake
The Wind Over the World by Steven Utley
Scream Quietly by Sheila Crosby
Darwin's Suitcase by Elisabeth Malartre
Try and Change the Past by Fritz Leiber
Needle in a Timestack by Robert Silverberg
Dear Tomorrow by Simon Clark
Time Gypsy by Ellen Klages
The Catch by Kage Baker
Real Time by Lawrence Watt Evans
The Chronological Protection Case by Paul Levinson
Women on the Brink of a Cataclysm by Molly Brown
Legions in Time by Your Humble Servant
Coming Back by Damien Broderick
The Very Slow Time Machine by Ian Watson
After-Images by Malcolm Edwards
"In the Beginning, Nothing Lasts . . ." by Mike Strahan
Traveller's Rest by David I. Masson
Twember by Steve Rasnic Tem
The Pusher by John Varley
Palely Loitering by Christopher Priest
Red Letter Day by Kristine Kathryn Rusch


Really good company to be among, innit?

I have a complex and conflicted relationship with A.E. van Vogt.

When I was a kid and had no money, I subsisted entirely on secondhand science fiction, bought with a fanatical eye to a value measured entirely in words per dollar. On trips to the local book exchange I'd walk out with volumes of van Vogt again and again, despite the fact that I hated every word he wrote - because he wrote SF and because he was dirt cheap.

Now, many decades later, I read him and even though I can see that he's rubbish, I can also feel that weird drive at the core of everything he wrote, a pulpish vigour that others can't copy, and I reluctantly admit that I like him.

All of which leads me to saying that when I read _Legions in Time_ I laughed my head off and then I read it all over again. It is one of the most delightful stories I have ever read.

I love time travel, and I love anthologies,so as soon as I heard about this one, months ago, it was a certainty that I'd buy it.

I like Mike Ashley's anthologies, because he's an SF magazine expert, so you can always expect some choice pickings from the past, along with recent material. Only one original story this time, though.

I'm especially happy to see the Ian Watson story again, especially as it appears to be revised from the Terry Carr Best SF #8 anthology version.

As for the Humble Servant, the other authors also think they're in good company because of him!

RE: Slow pacing of stories these days, do you have any insight into why that is now?

Like when I go back and read something like The Pastel City, it barely stops to catch its breath as it introduces fascinating concepts and takes breakneck turns all the way through. I wish more books these days would go for that!

Of course, I just read The Croning, and it's the same kind of book, starts off at a run and ends at a sprint, so the form isn't totally lost.

Hannah's Dad wrote: 'Now ... I read him and even though I can see that he's rubbish, I can also feel that weird drive at the core of everything he wrote, a pulpish vigour that others can't copy, and I reluctantly admit that I like him.'

There's more than that going on with Van Vogt, the original SF wild man. At his best, when it was all clicking -- for instance, the stories "The Monster" or "The Rull" or, IMO, the novel MISSION TO THE STARS aka THE MIXED MEN -- the ideas are wildly novel, and the story-line actually has a very strong internal logic on some level.

Even something that has some resemblance, by God, to a consciously thought-through subtext.

True, it may be that most of the time this never happened and 'pulpish vigor' was all that carried the day. Nevertheless, when it does all come together -- for me in the above stories -- it's as impressive as Greg Egan's best, in its way.

> There's more than that going on with Van Vogt, the original SF wild man. At his best, when it was all clicking -- for instance, the stories "The Monster"

Is The Monster the one where aliens visiting the ruins of earth reanimate successively more recent corpses? If so, I love it.

I'm probably being a bit unfair to Van Vogt in trying to stress my surprise at liking someone I used to hate. But that crazy drive is there though...

I have a friend who doesn't read any SF with the sole exception of Philip Dick, on the grounds that "it feels like he really means the crazy shit he's talking about". I think something similar could be said of Van Vogt.

Skyknyt, I think it's because no one teaches new writers the virtues of speed.

I think I'll write something about that here on this blog soon.

Hannah's Dad wrote: 'Is The Monster the one where aliens visiting the ruins of earth reanimate successively more recent corpses? If so, I love it.'

I just donated this story to Memory of Mankind:
https://www.memory-of-mankind.com/
https://en.wikipedia.org/wiki/Memory_of_Mankind

I love time travel stories, and this is one of my favorites. Maybe our hundred-thousand-greats grandchildren will be able to enjoy it.