In Which I Am Immortalized for a Year 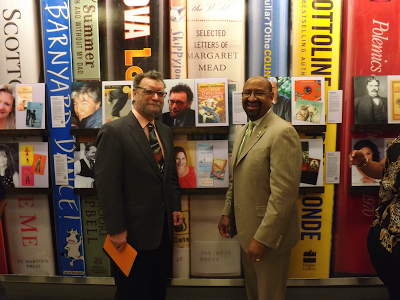 That's me up above in Philadelphia International Airport, with Philadelphia's head honcho, Mayor Michael Nutter.  I was there for the opening of "Philadelphia's Literary Legacy," a display of head shots, book covers, and biographies of 50 writers, playwrights and poets from Philadelphia's past and present.

To spare you the suspense, I made the grade.  As did Gardner Dozois and Tom Purdom.  We were up there with the likes of Benjamin Franklin, Louisa May Alcott, W. E. B. Dubois, Pearl S. Buck, and Thomas Paine.  Very rich company.  As were the contemporary writers, though I'm reluctant to name names because writers are writers and anyone who wasn't mentioned -- or, worse, wasn't the first mentioned -- would have their feelings hurt.

But I met some good people and made a couple of new friends (hi, Karen!), so I am happy.

You can read the Philadelphia Inquirer account of the event here.   And if you click on the Gallery link, the very first photo that comes up shows the back of Marianne's head as she snapped the above photo.

The display will be up at the airport for a full year.  Because it's  behind security, you'll have to travel out of the country to see my picture.  But I like to think that I'm worth it.

There was a celebratory party at Warmdaddy's in the evening.  Much mingling and schmoozing and warm feeling.  Quite lovely.  And after all the introductions and short speeches and such, a blues band got up on stage to play.

Nothing remarkable about that, of course.  But I couldn't help noticing that the band was made up of white men and that the (very literary) audience was, in the majority, black and female.

I couldn't help wishing that people from a hundred years ago could have seen that.  It would have given solace to those who needed it and dismay to those who deserved nothing better.


Above:  Photo by Marianne C. Porter.  My official photo was by Beth Gwinn.  Tom's and Gardner's were both by Kyle Cassidy.  I notice these things.

So...we can see the display, so long as we swiftly vacate the country afterwards. Hmmmm.

Lloyd Alexander was so very brilliant. And if you do some research into Welsh mythology, you discover that the Taran Thunderbolt series was even more brilliant than it seems on the surface.