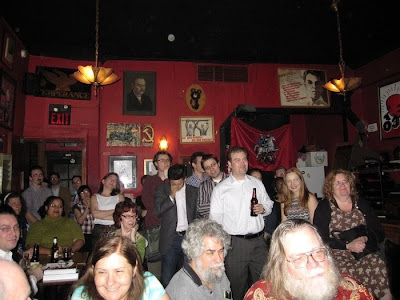 Editor superstar Ellen Datlow sent me a request to help publicize her Kickstarter fundraiser for the Fantastic Fiction at KGB (pictured above) reading series.  That was at the beginning of the week, and already they've raised their quite modest goal.  However, there are still seven days to go and I believe a number of cool incentives still available.

(My own story-in-a-bottle went for $250 pretty much immediately; so if you've been wondering how much such a thing is worth...)

The KGB Bar is a Communist-themed (really! check out the wall!) Manhattan bar , which has a strong connection with the literary arts.  And Fantastic Fiction at KGB is a monthly reading series which is a hoot and a half.  Admission is a pretty cheap donation and you get to drink while the readings are going on.

What will the series people do with the extra money?  As I understand it, they'll use it to fund the series for an extra year or three before they come begging for support again.  Elegant and simple.

You can find the Kickstarter page here.


And as long as we're talking fundraisers . . .

Bill Campbell has asked me to publicize the indiegogo fundraiser for his and Professor John Jennings's proposed anthology, Mothership:  Tales from Afrofuturism & Beyond.  Which is, as I read it, a gathering of stories by writers of African descent.

African-American writers today have a position in American literature analogous to that held by Jewish writers in my youth.  Which is to say that they're producing brilliant work all out of proportion (it seems; but I don't think anybody's ever crunched the demographics) to their numbers.  When something important is happening, writers appear to chronicle it.

Yet, until recently, there were only a handful of science fiction writers of color whom anybody could name.  So it's a pleasure to see their presence increasing and a mitzvah to make them welcome.

Supporting this book is one way of doing that.  Or maybe just buying a book by a writer of color you've heard good things about and seeing if you like it.

You can find the indiegogo page here.