Gregory Frost -- Geek of the Week! 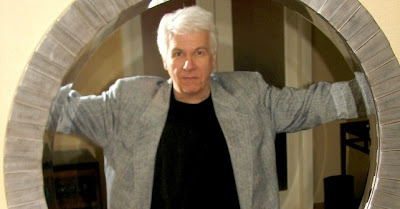 My good friend Gregory Frost has received the highest honor that Geekadelphia has to bestow -- that of Geek of the Week!

Greg is probably best renowned for his Celtic fantasies Tain and Remscella, and for the novels Shadowbridge and Lord Tophet, both set in what may be the most inventive fantasy milieu ever created . . . a world of shallow oceans and rare, scattered islands, connected by a web of bridges, each span of which contains its own society and culture.  So that, if you wish, you can walk from 1920s Manhattan to Imperial China and from there into the Raj.

I really love those books.  God grant that he writes more for us.

I'd write more about Greg's other books -- and his stories! you should all buy his collection Attack of the Jazz Giants immediately! -- but I've been running late this week and if I want to get this posted today, I'll simply have to do the man less than justice.

Janis Ian is Kickstarting the audio book of Catherine M. Wilson's When Women Were Warriors.  Or, rather, volume 1 of the series, The Warrior's Path.

Janis approached Wilson with the idea simply because she (Janis) loved the stuffings out of the book and has since it first came out.  Having a fan like that is always pleasant for a writer, and doubly so when the fan turns out to be a musical icon.  But having Janis Ian actively anxious to do your audiobook has got to have been a major moment for CMW.

I do a lot of traveling and listen to a lot of audiobooks and I've become painfully aware that not all audiobook readers are created equal. Janis is right at the top of the field.  Figuratively!  The audiobook she made of Society's Child, her autobiography, won an Emmy.

So if you're a fan of either artist . . . why not take a look and see if you're interested?

You can find the Kickstarter page explaining everything here.