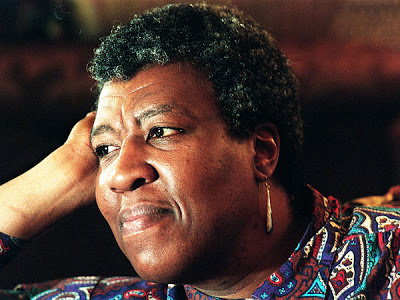 In Seattle, officials are considering naming a park after Octavia Butler.  This is a fabulous idea.  Octavia was not only an important science fiction writer and an important writer of color (it was a shock to me the first time somebody said that she made it all right for them to like what they'd previously seen as a "whites only" form; but I've heard it often enough to know it eas a real phenomenon), but an ordinary person who took upon herself the responsibility of making our world a better place.

When Octavia started out, she was a good science fiction writer.  But then she made herself an important one.  She was a great walker-of-cities and wherever she went, she took a notebook.  She looked for problems, places where people rubbed up against each other in a bad way, and then she looked for solutions to those problems.  This is one reason why (new writers should take note) her novels gained such a passionate following.  And also a reason why a park, a place that makes cities more livable, would be a particularly appropriate honor for her.

Also, apparently, the park is on the same street that her friend and fellow science fiction writer Eileen Gunn lives on.  So naming the park after her would be a present for a living writer as well.

Keep in mind that this is an advisory poll, not an election.  The people who decide will probably use it to winnow the number of possible titles to a handful and then talk it out among themselves.  Which means that ginning up big numbers, while potentially helpful, guarantees nothing.

But it's a lovely thought, and very good of the civic people in Seattle to come up with it.  I'm grateful for that alone.