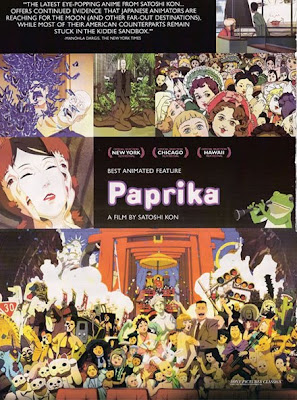 The great filmmaker Satoshi Kon died of pancreatic cancer on August 24 in Tokyo.  He was only 46.  You can read about it here.

The news comes as a shock. Kon made only four films in his too-brief lifetime -- five if you count the one he was working on when he died.  Of the four that have been released, Perfect Blue, his first effort, was a top-notch work of anime.  The others were classics of their genre.

I liked the dark, murky, trust-no-one paranoia of Perfect Blue a lot.  But it was Kon's second film, Millennium Actress, which made me fall in love with his work.  In it, two film geeks interview an old woman whose film career covered almost the entire history of Japanese cinema.  As she reminisces, the flashbacks to her earlier life mingle with scenes from the movies she made.  And then, at a critical moment, as she's running from a pursuer, they both pass straight in front of the two fanboys interviewing her.  "Hey, wasn't that . . . ?" one of them cries, and they go running after her, into her memories, into her movies.  It is a narrative invention that works so well, I was astonished that nobody had done it before.

Tokyo Godfathers managed to be both heartwarming and tough-minded at the same time.  Based on John Ford's western, Three Godfathers (which I confess I haven't seen), it follows the adventures of three homeless people in Tokyo -- a runaway girl, a transvestite, and a bum -- after they find an abandoned newborn baby and decide first to keep it, and then to find its parents.  Yeah, it's sentimental.  But it's also anti-sentimental at the same time.  Only a true artist can manage that.

Kon's last movie, Paprika, was essentially one of Pat Cadigan's "Deadpan Allie" stories put on screen, with the heroine being not an affectless cop but an affectless therapist.  A new invention, the DC Mini, allows therapists to enter into their patients' dreams and work directly with their subconscious.  In those dreams, Doctor Atsuko Chiba -- unsmiling and humorless -- expresses herself through an avatar named Paprika, who is flirtatious, sexy, mercurial, everything that her real self is not.  But somebody has stolen a DC Mini and dreams are beginning to break through into the physical world.  Which is a very bad thing because when released from the safe confines of sleep, dreams are madness incarnate.

It's worth mentioning that this is a gorgeous movie, shot for shot one of the most beautiful things ever put on film.

Now he's gone, decades too soon.  If you've seen his work, you know why I'm so upset.  If you haven't, my best recommendation would be to start with the last one and work your way backwards.  Apparently Kon left behind an almost-finished movie, The Dream Machine, which he described as "a road movie for robots."  When it's released, it'll be in the movie theaters only briefly because that's what they do with anime in this country.  I recommend you hustle out to see it, because Kon's work looks best on the big screen.

It's always a terrible thing when a great artist dies.  Far worse when he dies young and at the peak of his powers.  We must mourn not only the man, but the movies he'll never get the chance to make.  As one of Kon's many admirers, I can only say that our sadness is immense, but our loss is heartbreaking.

He also wrote a rambling but ultimately powerful letter on his deathbed.

If we're lucky, some of us will live within reach of a movie theatre that shows Dream Machine. (If we're very lucky, they'll show it subtitled instead of dubbed.) I'll be keeping an eye out for the DVD.

It makes me feel the loss all the more, knowing that he spent some of his precious dwindling time writing,so he could leave us one last string of words.

Paranoia Agent too, of course. Good God, but his filmography is brief for somebody that good and that hard-working!