The Green Stick of Yasnaya Polyana 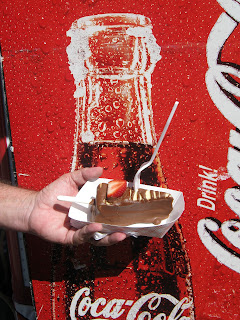 A little while back, James Morrow told me that he'd been invited to a literary conference at Tolstoy's family estate, Yasnaya Polyana,   "Promise me you'll spend at least five minutes looking for the green stick," I told him.

I should stipulate here for those who don't know him that Jim is an intelligent and educated man, a serious literary writer, and -- there's no getting around the word -- an intellectual.

He gawked at me in incomprehension.

So I began telling folks this story, ending by saying, "And he had no idea what I was talking about!"

They all gawked at me in incomprehension.

All educated people should know about the green stick.  Yet apparently most of you don't.  So here's the deal:

When Leo Tolstoy was five, his beloved brother Nikolai, then 12, announced to his family that he had discovered a great secret.  If it were revealed, there would be no more wars or sufferings and no one would ever die.  For reasons that probably made a great deal more sense to a preteen than they do to me, he wrote the secret on a little green stick and buried it on the edge of the ravine on the estate...

As a boy, Tolstoy spent a great deal of time looking for the green stick.  Alas, he never found it.

That's the story and now you know it.  But I do not give you this knowledge for free.  There's a price attached, and here it is:  If you ever find yourself in Yasnaya Polyana, you are morally obliged to look for the green stick, even if only briefly.  The odds you will find it are infinitessimally small.  But the rewards if you do are so very great.


Above:  I stopped by the Mt. Pleasant Glass and Ethnic Festival on my way home Saturday and bought some ethnic American food for lunch.  France may have pâté de foie gras, but we've got chocolate covered cheesecake on a stick!

I believe that Pascal's Wager emerges in more everyday contexts than is commonly realized. It largely explains ludicrous CEO pay, for example.

I think that if everyone in the world spent more time looking for the green stick there would less time for wars.

Well, that was easier than I expected it to be.