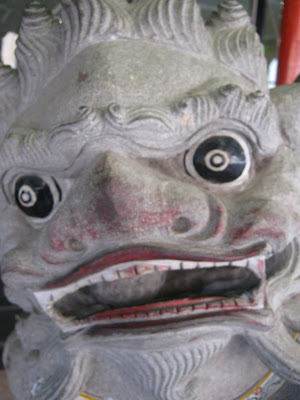 I'm midway through reading Vignettes from the Late Ming, assembled, translated, and annotated by Yang Ye, and for me it's been an intellectual adventure.  The book is a collection of hsiao-p'in, which are short, graceful essays written in an informal and seemingly spontaneous manner.  Which is to say they'd make terrific blog posts.  These works were wildly popular in the sixteenth and seventeenth century, yet surprisingly accessible today.

Yang Ye has done his anglophone readers a tremendous favor by carefully choosing hsiao-p'in whose cultural context is easily comprehensible to us.  As a result, the writers don't come across as exotic and inscrutable Chinoiserie figurines but as real flesh-and-blood people who seem like they might be pleasant company.

What do they write about?  Small things.  Yuan Hung-tao discusses the antics of three stupid servants, but then concludes that while many clever servants have been dismissed for good reason, these three remain, and asks whether this doesn't prove the efficiency of stupidity.  Hsu Wei records a dream.  Chang Tai describes a crab party -- the size of the crabs, the richness of their meat, the accompanying dishes mouth-wateringly described -- and then concludes happily, "I feel ashamed just to think about it."

These were men who were able to enjoy the transient moment.

If it weren't for copyright, I'd be perfectly happy to simply post a hsiao-p'in a day for the next two weeks.  Consider only this, the opening to "Inscription on a Portrait of Confucius at the Iris Buddhist Shrine" by Li Chih:

And already, the essay is halfway done!  I won't spoil the joke by telling you how it ends, but it's a beaut.

There is a great deal of sly humor in these works, and more than a little satire.

This is a thin book, perhaps a hundred pages of hsiao-p'in plus introduction and annotations.  I haven't finished it yet, but already I regret that these good men are dead.  I'd like to be able to tell Chang Tai about the crab party friends of mine threw over a quarter of a century ago, where they bought and steamed bushel after bushel of crabs and served them with beer.  One by one the feasters fell away, sated, until there were only me and one other, a tremendously large man, smashing open the crabs with beer bottles and sucking the meat out of the claws, while everyone else looked on in horrified fascination.

I've never been a gourmand, but that one night I was a genuine trencherman.  For hours after lesser men and women had given up, we two matched each other, crab for crab, grinning in appreciation of a shared and prodigious accomplishment.  I have no idea who won, nor do I think we bothered with it then.  We ate and ate into the early hours of the morning.

I almost wish I could feel ashamed of myself now.


And speaking of Chinese culture . . .

The Mid-Autumn Festival is today!  Have you bought your moon cakes yet?  I wish you all clear skies and mild weather for your moon-viewing tonight.


Above:  Stone lion seen in Chinatown this morning.  Marianne and I were shopping for moon cakes, but we picked up some duck's feet, several bags of dumplings, and some frozen red bean pops as well.  What a rich world we live in!

The thing about Zhang Dai that always endeared me to him was that he basically survived an apocalypse- the end of the Ming Dynasty. All of the stories he wrote about his privileged and decadent childhood were written after the Manchus invaded and pretty much destroyed the way of life he had known as a kid. He would have been either hiding out in the mountains, or living as an impoverished scholar who refused to "collaborate" with the new authorities. So when he writes that he "is ashamed" I think he really meant it; he seems to be nostalgic for the late Ming way of life, but often I think there is a great deal of regret as well for having lived so decadently right before the destruction of his homeland, likely he felt in some sense partly responsible for what happened.

Sorry, that should have read "endeared him to me".

Hah! If only admiring the hell out of an author would endear us to him.