Portrait of the Master 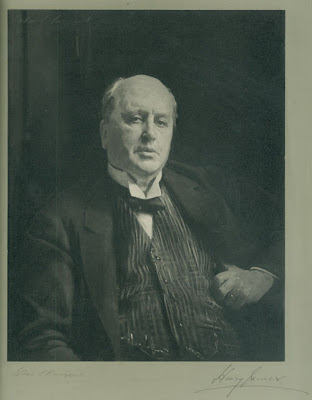 My friend Henry Wessells sent me the link to the above silver print, knowing I would find it interesting.  As I did, and the whole informative entry explaining it.  But, more than that, I found the entire James Cummins Bookseller blog a wonderful time-sink and source of daydreams, if you happen to be a bookish sort of person.  As well as being a perfectly delightful way of ridding yourself of excess money, should you happen to have that particular problem.

Glancing through the blog, I note such small marvels as:  Carl Von Vechten's portrait of Bryon Gysin.  Robert Van Gulik's self-published Dee Goong An, the translation that led to his later Judge Dee mysteries.  The first appearance of Sweeney Todd in a book.  A nine-page treatment for a movie that later became The Lion King, written by -- wait for it -- Thomas Disch.  I had no idea.

You can find the site here.

Normally, after writing about such literary baubles, I'd make a joke about my birthday coming up soon.  But as I get older and (some of) my friends grow more affluent, I worry that somebody might take me seriously.  I can't be trusted with rare books.  I remember vividly the time I found my copy of The Book of the Bear, autographed by Hope Mirrlees on the floor of the living room.  "Aha!" I cried.  "So that's why the couch wobbles!"

And I heard from Charles Stross . . .


Charlie pointed out that Hannu Rajaniemii's first novel, The Quantum Thief, will be published in late October by Gollancz -- and that the launch party will be held in the Finnish embassy in London.

"To add to the fun," Stross wrote, "what's not immediately obvious is that Hannu's got a PhD in string theory and is playing with hard physics in the key of Greg Egan . . . Art *and* science, in other words."

Which sounds awfully good, dunnit?  I've got my fingers crossed.

> A nine-page treatment for a movie that later became The Lion King, written by -- wait for it -- Thomas Disch.

I'm told he also wrote an episode of Miami Vice. And of course there's The Brave Little Toaster...

typo: "I hard from Charlie Stross"

Whoops. Correction made. Thanks for catching that.

Long ago, when media novelizations first became a big thing, some zine (maybe the SFWA Bulletin?) polled a lot of folks who'd worked in the form, including Disch, who'd novelized a Prisoner episode. He was by far the most upbeat of the batch. In answer to the last question, whether he'd do it again, he replied "In an instant!"

It made me think even better of him. The man was a real professional.

I'm a minor fan of Brion Gysin, so thanks for the lead.
I think it's incredibly poignant that the most famous thing he ever did was a practical joke which is known as something else by someone else.

I don't know that story, Neil. Oor, rather, I think I don't know it. Unless you're talking about the invention of the cut-up method.