The Proper Subject for Science Fiction 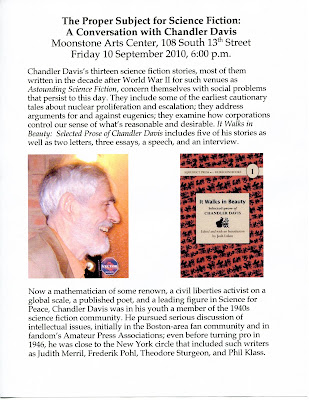 The full title for the evening is The Proper Subject for Science Fiction: A Conversation With Chandler Davis and it's in support of his Aqueduct Press book It Walks in Beauty: Selected Prose of Chandler Davis.  Which contains five of his stories, two letters, three essays, a speech, and an interview.

Above and beyond the inherent interest of the evening, I think that anybody who believes I'm a terrible Lefty should be required to attend.  That includes my beloved son, Sean.  "Christ!" I tell him.  "You have no idea.  You've never even met a real leftist."  There used to be thousands of them everywhere.  They darkened the sky with their passage.  And today?  Almost as rare as the ivory-billed woodpecker.

Sad, really.   They were a passionate and idealistic group.  Argumentative, mind you.  They loved to argue.  As Gordon Van Gelder said of Phil Klass, "He was a difficult man to agree with."


Above:  A jpg of the event's flyer.  All the info you need is there.