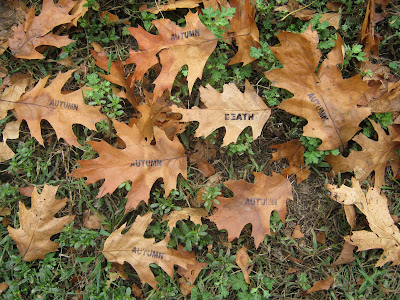 I've been working on a very cool project which, if all goes well, I can tell you about tomorrow.  For the nonce . . .

Last year, as autumn came in, Marianne and I were talking about the season and she said that I should walk through the 'hood writing DEATH on fallen leaves and scattering them behind me.

"No, no, no," I said.  Thinking that would be a good way of starting a local witch-hysteria.  But her idea got me thinking, and that got me started on the project.

Yesterday, ignoring my original reaction, I went into the park with a pair of rubber stamps.  Some of the results are shown above and below.

I'm in print!  "Libertarian Russia" just appeared in the December issue of Asimov's Science Fiction.   The irony of the title might elude you, but it certainly didn't elude my Russian friends.  When I was researching the story and asked some of them how one would say the title in Russian, the answer was always, "No, you see, such a thing is not possible.  One cannot be Russian and a libertarian.  It's a contradiction in terms."

Well, yes, and that was why I was interested in the question.

I finaly got the answer to my question -- which I ended up not using -- by asking what the Russian would be for "Libertarian Detroit." 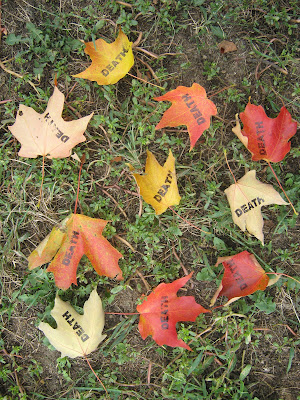 Well mike, What is russian for Libertarian Detroit? Don't keep us in suspense!
Also glad that you are back in print.
Might I assume from the name that the story is from your forthcoming novel Dancing with Bears? Either way, I am excited.
Shawn.

Alas, I've forgotten the phrase. I do recall that the adjective was,almost disappointingly, "libertarianski," though.

All the story has in common with DANCING WITH BEARS is that both draw heavily on my visits to Russia. Not that I have anything more than the most superficial knowledge of Russia. But it's a nation that really gets its hooks into you.