The Return of the Snow Beast! 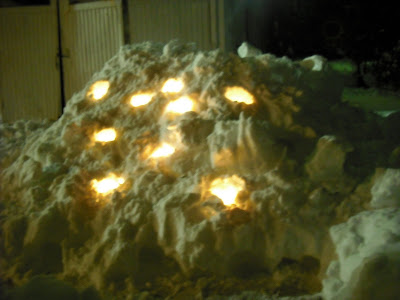 When I was seven years old in Schenectady, New York, a winter blizzard came through and by the time my father finished shoveling out, there was the usual enormous pile of snow in the back yard.   So he waited until all his kids were asleep and then went out and sculpted a slide from it.  He put a wooden ladder up the back to make it easy to climb, and then poured a bucket of water down the surface of the slid,  turning it to perfectly frictionless ice.

The next day I experienced the best winter morning in the history of the world.

I've never been able to live up to my father's standard (he grew up on a farm and knew how to do an amazing number of things), but when Sean was small, I made any number of snow forts and caves and volcanoes for him.  When Sean got bigger, he and I would sculpt the pile into enormous creatures and put tea lights in the eyes.  Sometimes we put a few drops of food coloring into a spray bottle of water and delicately tinted the snow with colors you were never perfectly sure weren't natural.  (Thanks, Dad!)    Whatever we did with the snow, it was all about fathers and sons.

Now Sean's moved out and has an apartment of his own.  So I didn't do anything with the snow.

Until I chanced to glance out the door and saw how dark and lifeless the pile looked.  So I punched a few holes in it, dropped in candles, and called Marianne to the door to look.

And I felt a whole lot better.

For no particular reason . . .

I feel like sharing my favorite music video ever with you.  Remember music videos?  Bruce Sterling said they were going to sweep aside science fiction and replace it with media-savvy postliterate freeform imaginative visual creativity.  Ah, the dreams of youth!

But if anyone deserved to sweep SF into the trashbin of history, it was the Dead Milkmen.  Those kids really had what it takes.

Posted by Michael Swanwick at 7:51 AM