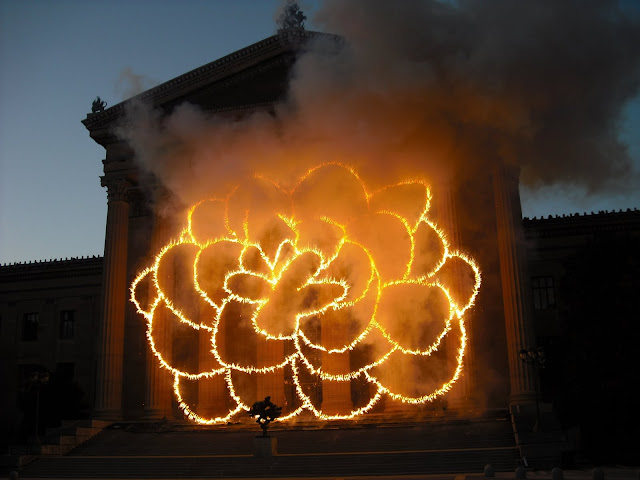 "Cai Guo-Qiang is the most important artist in the world today," the art student beside me on the east terrace of the Philadelphia Museum of Art said with passionate sincerity.  "I skipped my tutorial crits to see this.  My department head was mad, but I told him that if he wouldn't let me go, I'd drop out of the department.  This is the kind of event you only get to see once in a lifetime."

I knew this  guy was great because I'd seen his gunpowder drawings in Edinburgh, at an art show attendant upon the Festival Fringe and loved the black rainbow he created in the air high over over the Castle.  So when I heard that a major installation called Fallen Blossoms was scheduled here, I determined to be present for it.  Marianne and Sean and I were at the museum an hour ahead of time, so we were right up front.  And to make a long story short . . .

Cai's art (in my admittedly naive and untutored reading) explores beauty, impermanence, flow, change, and loss.  It's also very, very cool to witness.  The smoke, which doesn't come out as fully as it should in the pix and vids, is a vivid and moving part of it.

But only a small fraction of those watching noticed something extraordinary and incidental.


Did you notice it?  Betcha didn't.  But if you look at the tree to the right of the colonnaded entrance about fourteen seconds in, you'll see the briefest of flicks, a little speck fleeing to the right.

That's a red tailed hawk that was perched in the tree.  The explosives went off and it was outathere!  Marianne saw it explode from the tree and pointed it out in time for me to see it as well.  And now it seems to me an intrinsic part of the art.

I have a particularly visual imagination.  My first fantasy novel, The Iron Dragon's Daughter, was heavily influenced by Cindy Sherman's photographs.  My second, The Dragons of Babel, was in part shaped by Odd Nerdrum's paintings.  Now I'm playing with the idea of writing a third book to round the whole thing off.  This wouldn't happen anytime soon, if at all.  But I've started thinking about it and playing with images. 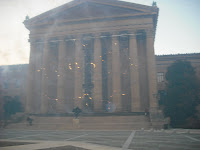 So I'm looking for suggestions.  What contemporary artists are out there doing rich and strange visual work that taps deeply into the mythic subconscious?  I'm talking about people I probably haven't heard of, mind you, and I'm looking for major talents, not just people who have done particularly nice pictures of elves.  So Picasso, Chagall, and Froud are straight out.  I'm looking for artists whose stuff is profoundly mind-warping.

Posted by Michael Swanwick at 1:00 AM

Had trouble thinking of anyone for a few minutes, and then it all seemed obvious - Remedios Varo.

Kyle Cassidy blogged that he was there, too, but no photos. I'm glad you did.

COOL. Especially the hawk. Thanks for the pics. I wish I could've been there.

wow!
I was at the NJ book fair (yawn), but MJ was there. Looks wild, some very carefully controlled chaos.

Spend a day following link trails through deviantart.com, and your visual imagination will be exhausted and (hopefully) satisfied. Lots of amateurs there, some pros as well, and a really amazing amount of quality work.

Hi Michael, I'm sorry I missed you and Mary Ann there, like going to a big party and missing your friends. Not to mention, missing the huddling factor of 10 to the fourth power. But, I am so glad we all saw falling blossom. Did you go to the Fabric workshop Museum event? I wanted to but got too cold.
Let's make a trek to his studio in Brooklyn! Do you speak Chinese?

Ditto the suggestion of Remedios Varo.

I used to have a housemate who was (and still is, I think) a pyrotechnics artist, but the only thing he has up on the web is watercolors. Neat watercolors, but they don't explode.

I haven't had a chance to see the book yet, but the few images I have seen from Wayne Barlowe's Inferno books including the novel God's Demon, are pretty amazing. I don't know if they tap into my mythic subconscious or whatever, but it's pretty affecting. Samples here:

I want to get these books for myself for Xmas, but I am afraid my small stack of books filled with horrific demon pictures might not go down well with some of my family members while visiting for Christmas. Maybe a post-Christmas gift to self is in order.

Chinese Artist Liu Bolin paints himself so that he blends into the background. If you look at the photos on these pages, none of them are photoshopped.

Another unusual artist is Julian Beever, whose paintings on sidewalks look three dimensional from a particular angle.

As The Iron Dragon's Daughter was the first book of yours I read, and subsequently had a huge influence on my young imagination, I can't say I'd be disappointed by another story from the same place.

When I first encountered Amy Cutler's art, I thought that they must surely be illustrations to fables that Kelly Link wrote in an alternate universe.

Thanks, everybody! Great suggestions. I can begin searching and thinking now.

I have no Chinese, alas. If I did, I'd visit China every year.

I did go to the Fabric Workshop, which was clearly unprepared for how popular the event would be. The black-clad young art people in the front sent us to the elevator in the back, where the politest and most professional guard I've ever encountered sent us back to the front. Where people were being sent to the back. The floor where the scroll was being burned had filled up before the event at the Art Museum was over, and people were sent to the second floor for a simulcast. The image being muzzy and the room crowded, Marianne and I went out to dinner instead.

A pity. But the art event belongs to those who show up early. And all praise to the Fabric Workshop for arranging the whole thing in the first place.

As for Kyle . . . I've come to the conclusion that what he really really REALLY likes is to take pictures of people. So something like Fallen Blossoms, which even a duffer like me can get a good shot of simply by pointing and snapping, doesn't get his juices flowing. That's my theory, anyway.