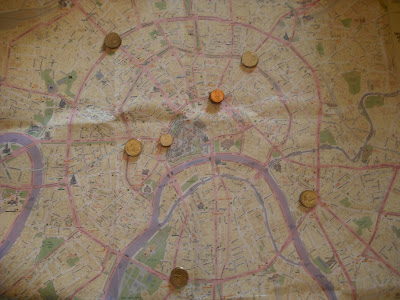 My friend Andrew Matveev recently interviewed me for an article in the Russian magazine Energopolis.  The title -- and the last line as well -- of the interview is I Haven't Yet Decided Whether to Burn Down Moscow. Which might well make me a lot less popular in Moscow, while at the same time boosting my ratings in the rest of the country.  In the eyes of Russians who don't live there, you see, Moscow might as well be a different country.  In fact, that was the first joke I ever heard on Russian soil:  "Have you heard that Russia's opened an embassy in Moscow?"

Well, obviously I have no hostile intentions toward Moscow, which is a city I love and fear.  May it prosper in peace forever.  I was talking about the Darger and Surplus novel, which has now reached its climax, when I have to decide which direction the plot will take.  Yesterday, I got out my map of the city and, using coins for markers, plotted out the Invasion of Moscow.  There it is above, in my rather murky reference photo.

As you can see, there are major factors in play at Arbatskaya, Oktyabrskaya, Taganskaya, Turgenevskya and Mayakovskaya, with others at Lubyanskaya and (of course) the Kremlin.  I might swap out Mayakovskaya for Pushkinskaya, just because Pushkin Square is a meaningful place for young Muscovites.  Then again, when Marianne and I stayed there, the statue of Mayakovsky was the landmark closest to our flat.  Time will tell.

I'd say more, but it would give away some of the plot.

And the traditional "Godless Atheist Christmas Card" competition is shaping up strong . . .

Those who read this blog regularly (hi, Marianne!) will remember that in my household there's a yearly informal competition for the Seasons Greetings card that contains the absolute least amount of religious or sentimental content.  The two front-runners so far, received yesterday, are:

A) A photo card from one of my sisters of her two near-grown children standing in a gift shop alongside an enormous stuffed bear.  I'm not sure if the implied seasonal content is supposed to be the bear or the mercantilism.

B)  Another photo card (!) of some dear friends standing at the intersection of Haight and Ashbury streets.  Because nothing says Christmas like pretty colors, I suppose.

Who will win?  I'll keep you posted!

Posted by Michael Swanwick at 8:10 AM

Hi :)
Thank you for the fun post. I hadn`t known about Moscow in relation to the rest of Russia before.
Merry Christmas,
RKCharron

Oops. Watch out. Your brother-n-law does read your blog. Happy Winter Solstice ! And, what do we win? (more comments coming from the girls) Jim

since it's a picture of me, what prize do i win? i like cash and crystal

Guess who reads your blog? Your little sister (hi Marianne). Sure hope we win!! Godless AND atheist were the sentiment I was going for this festive holiday season.

Don't be too confident, Barbie. John and Judith Clute have yet to be heard from, and they are the reigning world champions of Godless Atheist Christmas Cards.

One year, Allen and Linda Steele sent a photograph of their younger selves protesting an appearance by John Ashcroft with the cheery holiday greetings, "We WARNED You About This Guy!" and I thought for sure that they'd win.

Then the Clutes' card arrived, and it had a picture of Lenin on it.

(Emily's right, though. If she and Jonathan win, I'll have to come up with a prize.)

So Moscow is to Russia as, say, Toronto is to Canada?

Also: I can't wait for the Darger and Surplus novel...