The Best Snow Shovel in the World! 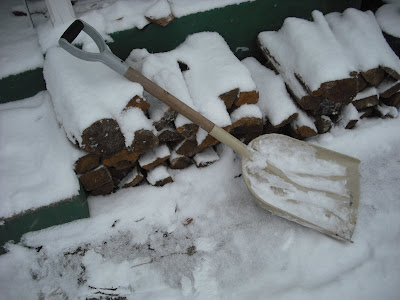 It's snowing!  Which means it's time to shovel out the driveway and sidewalk.  This is why (and I know that some of you ladies have been wondering) God created men:  To shovel snow.  Every winter, out I go, and every winter out I shall go, until the day comes for me to have that inevitable and fatal heart attack while shoveling and die in the traces.  The ambulance will come and go, but the snow will remain, and a new generation of men will take up the chore.  That's the Circle of Life, the way that anybody who grew up male in Vermont understands it.

Ever wonder what the single absolute BEST snow shovel in the world might be?  Luckily, about twenty years ago there was a string of snowstorms which left the hardware stores completely depleted of snow shovels and they had to improvise.  One store imported hundreds of shovels normally used in grain elevators to shovel grain.  When my standard flat-bladed aluminum shovel fell apart like the piece of worthless consumer trash it was, I was fortunate enough to discover  . . . the Grain Hog.

Oh, man, what a shovel.  The scoop is made from a tough and durable thermoplastic, so it's lightweight.  It has reinforcing ribs, so it's strong.  It has high sides, so you can scoop up a lot of snow and it won''t simply slide off if you tilt the blade ever so slightly.  It's a real tool designed for people who do real work, so it's made to last.  I've had it for decades and the blade still scrapes the surface of the sidewalk straight as straight.

The snow was coming down in soft pellets a few minutes ago.  Now it's falling in great big feathery flakes, hurrying toward the ground most of them, but some few dancing upward in merry spirals and loops, enjoying the flight.  They mute the colors and soften the outlines of the small old stucco'd houses of Roxborough.  Here and there a puff of smoke from a fireplace or wood stove bends down under their weight before dispersing into the air.   This really is the most beautiful time of the year.

Mostly because it gives me an excuse to use my Grain Hog.

Posted by Michael Swanwick at 8:48 AM

Here's hoping your grain hog has plenty of snow to sink into up in Philly! We're over a foot now and more coming down. That's 50 miles northwest of DC.

You're so right and thank you for the enlightening comments. I frequently wonder what men are here for. My very own Big Strong Man (tm) has been out for several hours with the snow blower trying to keep the driveway clear enough for my car, which has all-wheel drive and 8 inches clearance. His does not.

I went out with the shovel (inferior to a grain hog) and took care of some walkways. They're now covered with several new inches of snow.

It's a great snow, fairly light and dry. It's not super cold, either, just a bit windy. I feel like a kid in this stuff.

BSM (tm) is now taking a nap on the couch prior to tackling the driveway once again before dark. I have to admit, the other reason to keep him around is for being a weatherdude. We were pretty well prepared for this, though I kept doubting his predictions of how much snow we'll get.

[::sigh::] God didn't create men to shovel snow. He created you to take out the trash. The snow part is a bonus. OUR bonus, not yours. Sucker!

Okay, without sinking to the pathetic fallacy that men are capable of actual thought, let's look at the taking-out-of-garbage situation in evolutionary terms.

When a woman takes out garbage, she's stuck with a jerk with ambitions upon her virtue for most of an extremely long and boring evening.

When a man takes out garbage, he's stuck with a chore that takes something like one minute, after which he's faced with the gratitude of a woman he loves.

Nope, you're right, Livia. We're jerks, all right. And hope to continue so for a long,long time.

Man, simple yard tools these days are junk, and over priced. I bought this short spade a couple of months ago, and the entire thing is laminated in some kind of plastic. I asked the sales person about sharpening it, and she seemed to think it is best to not scrape off the "protective coating" in order to make it function properly as a spade.

The only good tools are found in estate sales. The problem is, it has to be a real estate sale (ie, cleaning out the house of someone who has died); tools bought decades ago are stronger than a lot of the ones you buy new now, and the people who owned them would never sell these treasures off while still alive.

I got my Grain Hog years ago for shoveling the stable. After our horse Charlie died (peacefully and unassisted other than by being 30 years old)the GH became indispensable for all sortsa things here at the farm, and absolutely perfect for big scoops of compost into my cart.

Which is why I stored it in a little shelter near the compost heap, which is where it nestled happily when the 17.5 inches of snow we had by midmorning yesterday brought down a 60 foot oak tree right smackdab on the shelter.

No other damage, and I am more than moderately confident that GH survived the treefall, not that it does me any good for shoveling the snow (and tons of tree) beneath which it and the shelter, now rest.

Nor am I, particularly complaining. There are signs and there are signs, and this one sent a pretty clear signal as to who's shoveling snow here in the next few days: No one!