The Godless Atheist Christmas Card of the Year 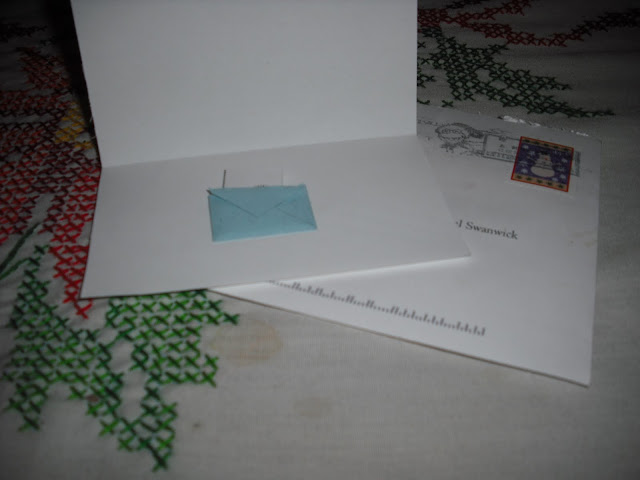 We have a winner!  And not just any winner either.  Into a crowded field on a very strong year, a dark horse plunged and effortlessly swept aside the competition.

And just how strong was the competition?  John and Judith Clute's card would have taken the prize in any ordinary year:  It was one of Judith's art prints, showing two staring eyes, an enormous ear, and a mouth whispering into the ear.  The print was titled "Locked Room Mystery" and above and beyond its Godless Atheist qualities, I quite liked it.  A lovely thing.  but as a Christmas card, it raises unsettling questions:  Just who's been murdered?  Santa Claus?  Hundreds of millions of fir trees?  Jamal Kwanzaa?  A very dark card indeed.

I opened the envelope and inside was a piece of white paper folded over once.  I unfolded the paper and there was the smallest envelope I've ever received, glued to the paper so it wouldn't get lost.  Carefully, I slitted open the envelope.  (It had been sealed.  Jason is an artist.  Such touches are typical of him.)  Inside was a piece of stiffer paper folded concertina-style.  It began with a picture of a flower, or possibly a weed, with a grinning skull-head.  There ensued a lengthy and demented rant such as can only come from the inimitable Mr. Van Hollander.

"Dear Michael and Marianne," it began.  "you probably read about the 'Spiral' that appeared over Norway while President Obama was standing in front of a mirror in a tuxedo, practicing his acceptance speech for the Nobel prize.  Last night a similar Fortean phenomenon appeared on our street.  Make of this what you will but there are significant parallels."

There ensued what is essentially a short horror story ending with Jason, drastically reduced in size, taking up residence in a doll house, and asking for advice on how to undo his sad situation.

I could not help Jason out of his sad fix, but I could acknowledge his genius, and award him the Godless Atheist Christmas card laurels. 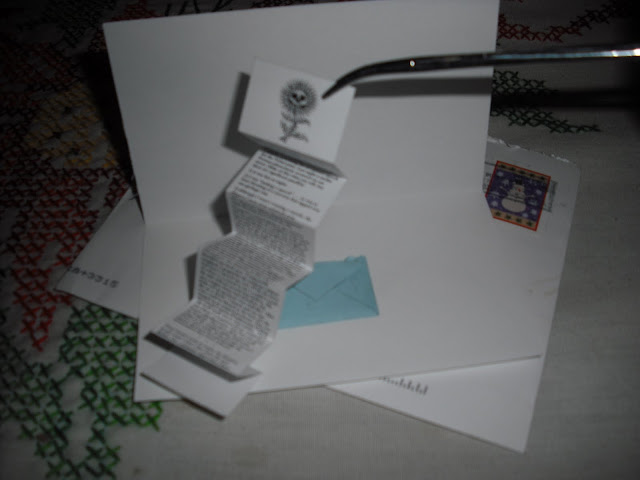 Posted by Michael Swanwick at 2:14 PM