Lost in America With Paul Barnett 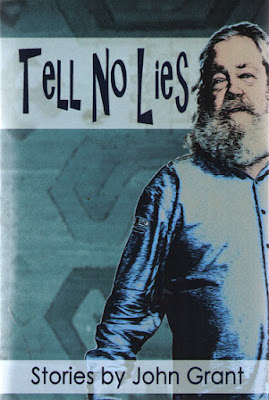 So there I am, somewhere in the wilds of Long Island, in a car with Paul Barnett and Pamela Scoville.  A convention is involved. We're on a quest to get a bottle of wine or a pizza or something like that. Marianne is back in the hotel. And when we've snagged the Whatever and head home, it quickly becomes obvious that we're lost.

We're lost and we've left the only person with a sense of direction in the hotel.

So, map on lap, I call Marianne and tell here where, to the best of our reckoning we are. "You're heading the wrong way," she says. "Get turned around, get onto the highway, and head south."

Ten minutes later, I call again. "The ocean is in front of us."

"You went the wrong way on the highway. You wanted to go south."

Eight minutes later: "No, don't go that way. That's the opposite of where you want to go."

Then, "How the hell could you possibly be there?"

It took us something like an hour and a half to make our way back to the hotel. Imagine what it was like in that car. The exasperation. The dark recriminations. The fists hammered on the dash. It was a recipe for misery.

Except it wasn't. We were all three laughing almost constantly about our inability to follow directions, the perverse brilliance of our mistakes, and what Marianne must be thinking about us every time her phone rang. In between which, the conversation sparkled. (Paul and Pam knew pretty much everything.) It was wonderfully fun.

I can't think of anyone I'd rather be lost in America with than Paul and Pam. Except Marianne. But then, I wouldn't  be lost. Because she has a sense of direction.

And now Paul is gone. Every now and then, he and I would reminisce about how we'd turned a ten-minute chore into a shambolic saga of incompetence. In the back of our heads, I think we expected that someday we'd repeat the experience. Alas, that will never happen now.

But for one fleeting Camelot-like hour, the world was as it should be, even the disasters were enjoyable, and the company was beyond compare.

Farewell, Paul. Remember to move toward the light.


And the best way of remembering a writer is . . .

Paul wrote an astonishing number of books, both fiction and fact. (Just his work co-writing The Encyclopedia of Science Fiction and The Encyclopedia of Fantasy would be enough to occupy an ordinary writer full-time.) You can find his tally of them here, though it will take some wandering around. If you want to honor his life, consider buying one and reading it. Or use the library. That's cool too.

If you're a writer, though, you should immediately get Discarded Science, Corrupted Science, and Bogus Science, authoritative accounts of entertaining ideas that simply aren't true, written under his John Grant pseudonym. If you can read one of those books and not get a story idea out of it, you're made of sterner stuff than I am.


Above: You could also read some of Paul's short fiction. I stand in awe of how prolific he was.


Posted by Michael Swanwick at 7:19 AM