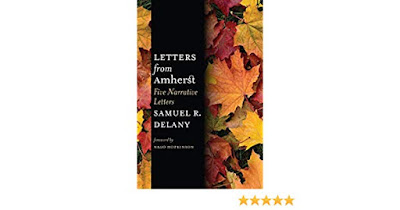 
I came back from Boskone with rather a self-indulgent pile of books and am now midway through the first, Letters from Amherst by Samuel R. Delany.

One of the stranger perks of dedicating one's life to the arts is being able to read a friend's private letters without involving oneself in a morally questionable decision. Chip's letters display all the virtues of his fiction. They're vivid, carefully observed, and the product of a particularly fine mind.

But I won't review the book here. Either the mere existence of a book containing five long narrative letters by Delany makes you determined to buy it, or else you don't want it. In the latter case, nothing I might say would convince you otherwise. In the first, nothing would deter you.

So I will simply say: There it is. You know whether you want it or not.

Count me in the mere existence category.

Yeah,I get where you're coming from.