The Iron Dragon's Mother and the Matter of America 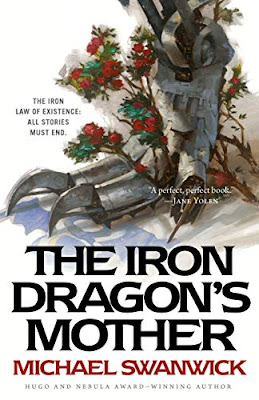 The Iron Dragon's Mother received a long, detailed, and (for me at least) gratifying review in The Los Angeles Review of Books recently. So of course I'm going to share parts of it here with you.

The author of the piece, Sean Guynes, titled it "The Matter of America: On Michael Swanwick's 'The Iron Dragon's Mother'" and, really, it's more of an analysis than a review. Which is welcome when, as here, the book being analyzed is recognizable as such. (This doesn't always happen. I could tell you stories!) Here's how it begins:


SCHOLARS OFTEN ORGANIZE the medieval literature of Western Europe into three major cycles: the Matter of Britain, about King Arthur and his associates; the Matter of France, about Charlemagne and his confrères; and the Matter of Rome, about Roman (and occasionally Greek) history and mythology.


Then, after exploring the novel, its predecessors, and the process by which I arrived at it, Guynes reaches the heart of his thesis:

The Iron Dragon’s Mother is explicitly concerned with the American contexts of fantasy, with the very question of how to write in a genre that (arguably) depends upon the depth and autochthony of myth while feeling as many white Americans do, not unproblematically, that they have no culture, no myth, no history beyond, for example, family stories of relatively recent immigration to the United States.


And of course he goes on from there, but now I've told you enough for you to know if you're interested in reading the entirety of the essay.

It is perhaps doing this very thoughtful essay a violence to end by suggesting that part of it would make quite a charming blurb. But I cannot resist. Here it is:

The Iron Dragon’s Mother is gleefully unreliable, offering the happiest ending to his Faerie trilogy possible — one with little death, an empowered protagonist, and a playful revelation. But only if you don’t think too hard about it.


Isn't that great? This is, incidentally, the first critical piece to look at all three novels of the Iron Dragon/Industrialized Faerie trilogy.

You can read the entire review here.

I just finished this review/essay. You really deserve it.