A Day Well Wasted With F&SF 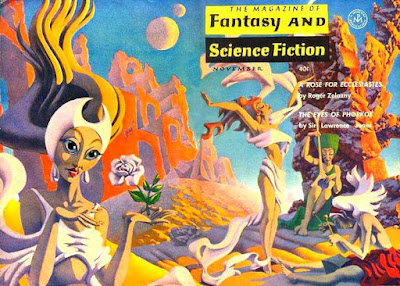 I had an idylic afternoon the other day, sitting in the back yard with Marianne and brushing and blowing out the baking soda from hundreds of copies of The Magazine of Fantasy and Science Fiction that had been de-mildewing in plastic bags for most of a year. These included every issue of the magazine from volume one (when it briefly was The Magazine of Fantasy) to somewhere in the Nineteen-Seventies.

The reason I was doing this was irrelevant (but if you're curious, go back a few days and you'll find it). What matters is that it was a bright blue October day and as we worked, we kept admiring the contents of the magazines. Chesley Bonestell covers! Gahan Wilson cartoons! Original fiction by P. G. Wodehouse and Robert Graves and Truman Capote! Stories by pretty much every major science fiction writer of the times! Some of which were classics.  Heinlein's "--All You Zombies--"! Tiptree's "And I Awoke and Found Me Here on the Cold Hill's Side..."

There were also review columns by so stellar a run of writers that if I tried to list them all, I'd be sure to leave someone out, so I'll refrain.  And strange one-offs like Samuel R. Delany's review of Stanley Kubrick's 2001.

Plus, of course, the odd pleasure of finding an intriguing story by somebody you've never heard of and dipping into it to see if the author's obscurity is deserved or not.

I won't pretend I didn't stop to read from time to time. It was a lovely way to squander most of a day.

And a lovely reminder of what a distinguished ornament to our culture F&SF has been.

Which reminds me that Gordon Van Gelder, publisher and former editor of F&SF, will be guest of honor at Capclave this weekend.  Going to hear him would be a good way to pay homage to the magazine.

I'll be at Capclave too, on Friday and Saturday.  If you're there, be sure to say hello.


Posted by Michael Swanwick at 6:48 AM

It's a wonderful magazine; it's cover somehow is one of my earliest memories, mixed, strangely, with star trek on a black and white TV and playboy centerfolds. Loved Gahan Wilson. And Alice Sheldon and all the iconic SF, which, at one time, were just new stories in a magazine...

Selling a story to Gordon, and then to Charlie was, a high point of my life. My last paper submission!

I return now to my deserved obscurity, hoping, to be unearthed in the future, now and then, by people like yourself.

Thanks, Michael. I think the Capclave panel on the history of F&SF is 1:00 PM on Sunday.

And thanks to you, too, Edward.

F&SF has been part of my life for 30 years. It will be a sad day if it ever ends. I will never miss an issue. To me the magazines are the heart of SF, where it is born and burns most brightly. Every SF reader should subscribe to the magazines while these treasures are still with us.

Thanks for the Bok cover, one of his last works, I believe.

I'm looking forward to Capclave for a chance to honor Gordon and F&SF. I've had my subscription for about 20 years now. Everyone who enjoys should come to Capclave where we continue to emphasize short stories and their authors and editors.