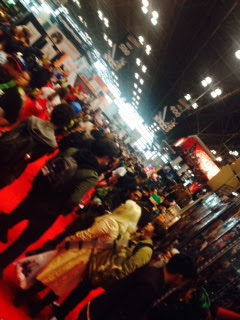 I spent Sunday at the New York Comic Con, autographing copies of Chasing the Phoenix, and at times all I could think of was the line from Don DeLillo's Mao II, "The future belongs to crowds."  There were a lot of of people there.  Last year racked up over 150,000 distinct visitors and since this year's con was sold out months ago, I can't imagine there were any fewer this time around.

Here's the thing, though. DeLillo's novel, first published in 1991, was a dark meditation on the death of liberal humanist values -- privacy, the primacy of the individual, literature, personal agency, and so on. And in the crowds of people paying for the privilege of being allowed to buy into corporately branded fantasies, you could certainly see something like that, if you chose.

But it didn't look like that from the floor.

There were some superficially positive things -- a nice mix of skin colors, the fact that women and girls were far from a rarity -- that you could write off as irrelevant. But so many of those people looked to be having fun in a way that didn't seem to have anything to do with herd mentality. Parents brought their children. A lot of those children came in costume. And sometimes the parents wore costumes too.

It was striking how many people were in costume. It seemed obvious to me that this was their way of emphasizing that however the exhibitors might see the event, it was not for them a solely commercial operation. They were there to celebrate their love of popular culture.

It wasn't a crowd in the sense of DiLillo's despairing vision, mindless and controlled, but something more democratic, and more joyful. All those values that intellectuals were despairing of were in full play -- only focused not on winners of the Penn/Faulkner Award but on Deadpool and Buffy and Power Rangers Dino Charge.

Of taste and scent, no argument," as Avram Davidson liked to say. You can make grumpy noises that, really, people out to have more elevated tastes than they do. But you can't argue with joy.


Above: But it really was very crowded.